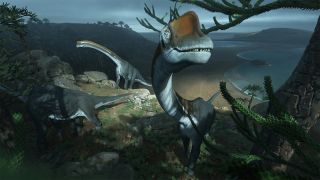 About 160 million years ago, a gigantic, long-necked dinosaur — the earliest known titanosaur on record — swooped its lengthy neck to and fro as it foraged for a leafy meal in Jurassic-era France, a new study finds.

The newly identified dinosaur was immense: It weighed about 33,000 lbs. (15,000 kilograms), about equivalent to the weight of a garbage truck, and measured more than 50 feet (15 meters) long, or longer than a standard yellow school bus, the researchers said.

They named the newfound beast Vouivria damparisensis after the Old French word "vouivre," which is based on the Latin word for viper. The name is also tied to folk history: "La vouivre" is a legendary winged reptile in the region of French-Comte, where the fossils were found. The species name honors the village Damparis, where researchers found the specimen in the 1930s. [Photos: One of the World's Biggest Dinosaurs Discovered]

"Vouivria would have been a herbivore, eating all kinds of vegetation, such as ferns and conifers," the study's lead researcher, Philip Mannion, a faculty member in the Department of Earth Science and Engineering at Imperial College London, said in a statement. "This creature lived in the late Jurassic, around 160 million years ago, at a time when Europe was a series of islands."

An anatomical analysis revealed that V. damparisensis is the oldest known brachiosaurid, a type of titanosauriform dinosaur. Titanosaurs were a diverse group of sauropods (enormous four-legged, long-necked and long-tailed dinosaurs) that lived from the late Jurassic to end-Cretaceous periods. For instance, Brachiosaurus, a dinosaur with a giraffe-like neck, was a titanosauriform that lived during the Jurassic period.

"We don't know what this creature died from, but millions of years later, it is providing important evidence to help us understand in more detail the evolution of brachiosaurid sauropods and a much bigger group of dinosaurs that they belonged to, called titanosauriforms," Mannion said.

When researchers discovered V. damparisensis in 1934, it barely received any scientific attention, the researchers said. Instead, paleontologists stored the specimen at the National Museum of Natural History in Paris, and it was only briefly mentioned throughout the years as "the Damparis dinosaur."

The study was published online May 2 in the journal PeerJ.