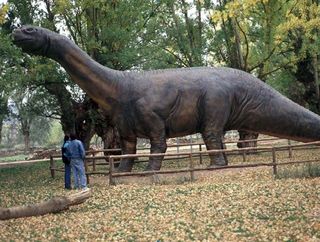 A model of Aragosaurus, the first dinosaur ever discovered in Spain.
(Image: © Grupo Aragosaurus-IUCA)

The first dinosaur ever found in Spain is not as old as paleontologists had believed — though at 130 million years old, the long-necked creature is no spring chicken.

The dinosaur, Aragosaurus ischiaticus, was originally discovered in 1987. But the fossil was difficult to date. Now, researchers at the University of Zaragoza's Aragon Research Institute of Environmental Sciences have found the sauropod's age was estimated at 15 million years too old. The age-shaving results suggest the dinosaur was an ancestor of the enormous Titanosauriforms, a group that includes the largest dinosaurs to ever live.

The new age estimate puts the dinosaur in the Hauterivian age between 136 million and 130 million years ago, the researchers reported March 12 in the journal Geological Magazine.

"This is the only dinosaur of this period found in Spain and is also the most intact in Europe," study author José Ignacio Canudo of the University of Zaragoza said in a statement. "It can be categorized amongst the well-known sauropods of the Jurassic-Cretaceous transition (135 million years ago), the most abundant species during the Barremian age (116 million years ago). As this group has been studied the least, the Aragosaurus fills the gap."

To accurately date the Aragosaurus specimen, Canudo and his colleagues conducted fieldwork at the site of the find. They used fossil pollen found in the same layers of sediment as the Aragosaurus to pinpoint the date. By knowing the evolutionary history and age of the plants that released that pollen, the researchers can estimate the ages of fossils found in the same layers.

The more accurate date helps flesh out the sauropod family tree, the researchers reported. Aragosaurus fills a gap in fossil knowledge during the shift from the Jurassic to the Cretaceous period, Canudo said.