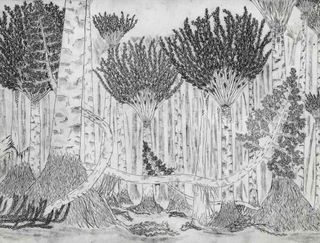 One of the earliest forests in the world was home to towering palmlike trees and woody plants that crept along the ground like vines, a new fossil find reveals.

The forest, which stood in what is now Gilboa, N.Y., was first unearthed in a quarry in the 1920s. But now, a new construction project has revealed for the first time the forest floor as it stood 380 million years ago in the Devonian period.

"For the first time, we actually have a map of about 1,200 square meters (12,900 square feet) of a Devonian forest," said study researcher Chris Berry, a scientist at Cardiff University in the United Kingdom. "We know which plants were growing where in this forest, and how they were interacting."

The fossilized forest floor contained three types of enormous plants. The first, known as the Gilboa tree or Eospermatopteris, was once thought to be the only type of tree in the forest; quarry workers have been carting specimens out of the area since the fossil plants were first discovered. This tree was tall and looked like today's palm trees, with a crown of branches at the very top.

But an even stranger specimen lurked in this ancient forest. Amid the towering Gilboa trees were woody creeping plants with branches about 6 inches (15 centimeters) in diameter. These giant plants, known as progymnosperms, seemed to lean against the Gilboa trees for support, perhaps even climbing into them occasionally, Berry said. [Top 10 Poisonous Plants]

"Those trees were covered in little branches which sprung out in all directions and made a sort of thicket on the floor of the forest," Berry said. "That was a big surprise."

The researchers also found a fragment of a third type of tree, lycopsids, which would later dominate the Carboniferous period from about 360 million to about 300 million years ago. They reported their findings Wednesday (Feb. 29) in the journal Nature.

The new view of the ancient forest is changing paleontologists' understanding of what the landscape looked like. The earliest researchers thought the forest was in a swamp, but Berry and his colleagues, including study leader William Stein of Binghamton University in New York, now believe the forest stood in a flat coastal plain near an ancient shoreline. It was probably buried and preserved when a river channel shifted, bringing in loads of sand to cover the forest floor.

Before the forest's death, it was probably chock full of millipedes and insects, Berry said. As they grew, the Gilboa trees shed branches, which would have littered the forest floor and created a perfect habitat for creepy-crawlies.

"I've spent 20 years trying to imagine what these plants were like as individuals, and yet I really had no conception of them as an ecosystem," Berry said. "Going to Gilboa and sitting in the middle of the forest floor, you could almost see them growing out of the ground. … The fossil forest came to life in front of my eyes in a way that has never happened before."

More broadly, a deeper understanding of the forest helps paleontologists piece together the ecology of the very earliest forests on Earth. The Devonian period marks a time when plant life began to shift from small, scattered vegetation to large-scale forests, Berry said. Plants remove carbon dioxide from the atmosphere, and during the Devonian forest boom, carbon dioxide levels may have dropped from 15 times that of today to modern levels.

The arrival of forests changed the way the whole Earth system worked, Berry said. He and his colleagues are using the Gilboa site to understand how this ecosystem flourished.