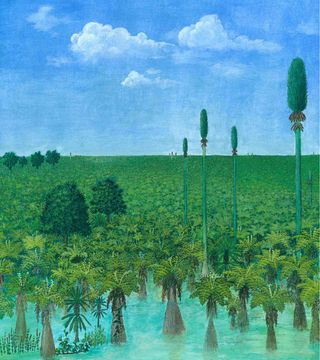 An artist's painting of a tropical forest before it was preserved in volcanic ash 300 million years ago in what is now Inner Mongolia.
(Image: © Courtesy of Jun Wang / Painting: Ren Yugao)

About 300 million years ago, volcanic ash buried a tropical forest located in what is now Inner Mongolia, much like it did the ancient Roman city of Pompeii.

This preserved forest has given researchers the unusual opportunity to examine an ecosystem essentially frozen in place by a natural disaster, giving them a detailed look at ancient plant communities and a glimpse at the ancient climate.

This ancient, tropical forest created peat, or moist, acidic, decaying plant matter. Over geologic time, the peat deposits were subjected to high pressure and became coal, which is found in the area.

The volcano appears to have left a layer of ash that was originally 39 inches (100 centimeters) thick.

"This ash-fall buried and killed the plants, broke off twigs and leaves, toppled trees, and preserved the forest remains in place within the ash layer," the authors, led by Jun Wang of the Nanjing Institute of Geology and Palaeontology in China, wrote in an article published Monday (Feb. 20) in the journal Proceedings of the National Academy of Sciences.

The ash layer dated to about 298 million years ago, early in the Permian Period, when the supercontinent Pangea was coming together.

The researchers examined three sites with a total area of 10,764 square feet (1,000 square meters) near Wuda, China. At these sites, they counted and mapped the fossilized plants. The tallest trees that formed the upper canopy — species in the genera Sigillaria and Cordaites — grew to 82 feet (25 meters) or more. Lower down, tree ferns formed another canopy. A group of now-extinct, spore-producing trees called Noeggerathiales and palm-like cycads grew below these, they found. [Image Gallery: A Petrified Forest]