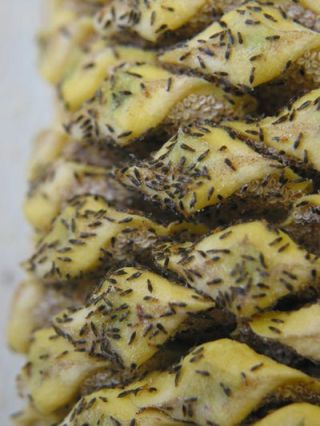 Insects known as thrips are shown leaving the cone of a male cycad plant as the cone heats up and emits an odor to drive the insects away. The thrips feed on cycad pollen, which is contained in whitish sacs visible under the cone scales.
(Image: © Irene Terry, University of Utah.)

Some primitive plants use heat and strong odors to trick insects into pollinating them, a new study finds.

Cycads are primeval plants that have been on Earth for nearly 300 million years. Found largely in tropical areas, they are a type of gymnosperm—plants with relatively exposed seeds. The group also includes modern pine and fir trees. The seeds are contained in large, female cones that grow in the middle of its palm-like fronds—male cones contain the pollen needed to fertilize the seeds.

Scientists once thought that cycads were pollinated by wind blowing the pollen from male to female cones, but the new findings, detailed in the Oct. 5 issue of the journal Science, show that these plants have a much different method of propagation that may represent an intermediate step in the evolution of plant pollination.

Irene Terry of the University of Utah had previously found that the scales of the cycad cones were too tightly packed for the seeds within to be reached by wind-blown pollen. Instead, the cycads need the help of small flying insects called thrips, her latest study shows.

These tiny bugs love to dine on the pollen found in the male cycad cones and get covered in the stuff as they chow down. When they visit the female cones, they deposit leftover pollen they've collected.

"They [cycads] are trading food for sex," said study co-author Robert Roemer, also of the University of Utah. "Pollen is the only thing these thrips eat, so they totally rely on the plants. And the thrips are the only animals that pollinate the plants.”

But getting the thrips to leave the pollen smorgasbord of the male cones for the pollen-free female cones takes a smelly little trick.

The male cones typically emit an odor, from the chemical beta-myrcene, that is very attractive to the thrips in small amounts. But in larger doses, the chemical becomes toxic to the insects and can drive them away.

The male cones emit a whiff of the chemical to attract the thrips and get them nice and coated with pollen, then start to heat up by using a stockpile of sugars, starch and fats that would normally go toward powering everyday cell functions. The heat then causes a massive release of beta-myrcene that drives the thrips out of the cone.

"These cycads heat up, and associated with that heating is a huge increase in volatile fragrances emitted by the cone," Terry said. "It takes your breath away. It’s a harsh, overwhelming odor like nothing you ever smelled before."

"Think of a guy with too much after shave," Roemer added.

After being driven out of the male cones, some thrips still want seconds. Now it’s the female cones' turn.

The females begin to emit the same beta-myrcene smell, not as strongly as the males do, but enough to attract a few hungry thrips fooled into thinking the female is a male cone.

When the thrips enter the female cone, they find a nasty surprise: no pollen, only seeds. The leftover pollen on their bodies sloughs off and fertilizes the cycad eggs. Clever plants.

"People think of plants as just sitting there and looking pretty and sending out some odors to attract pollinators, but these cycads have a specific sexual behavior tuned to repel, attract and deceive the thrips that pollinate them," Terry said.

This process, dubbed push-pull pollination, could be an intermediary step in the evolution of plant pollination. Some plant odors are thought to have been a deterrent to herbivores early on, while other plants developed odors to attract insect pollinators.