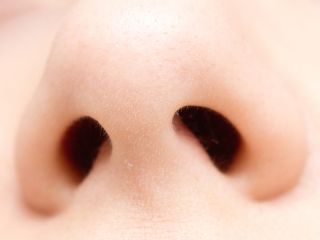 Your nose is one powerful protrusion. Whether it's a big honker or a little button, if it is working correctly you can sense a skunk from only 0.000,000,000,000,071 of an ounce of offensive spray.

Animals can trace even tinier trails. Male luna moths, for example, track females from 5 miles away.

Such nosiness is important for the survival of almost all creatures: to find food, avoid being eaten, and pick proper mates. It warns us about rotten milk, a burning house, or an unhappy skunk, and can turn our attention to attractive potential dates.

Despite its value, scientists knew little about how we sensed scents before the 2004 Nobel Prize winners took a jab at it.

In 1991, laureates Richard Axel of Howard Hughes Medical Institute and Linda Buck at the Fred Hutchinson Cancer Research Center discovered about 1,000 genes that encode for olfactory receptors inside the human nose. They also found that each receptor is tuned for only a small number of odors.

Researchers recently determined which receptors in a fruit fly detect which specific odors. They plotted each receptor to form an entire map of where the fly senses each scent.

"The results of our analysis allow us to make predictions about which odors smell alike to an animal, and which smell different," said Yale University molecular biologist John Carlson who worked with then-grad student Elissa Hallem, now a molecular biologist at the California Institute of Technology.

Their findings are published in the April issue of the journal Cell.

Although we don't yet have a scent map for humans, thanks to Axel and Buck, scientists know how you smell.

Take a deep breath. Air is sucked up into your nostrils over bony ridges called turbinates, which add more surface area to your sniffer. The air travels  over millions of olfactory receptor neurons that sit on a stamp-size sheet, the olfactory epithelium, on the roof of the nasal cavity.  Odor molecules in the air stimulate and inhibit the receptors.

Humans can recognize 10,000 different odors. However, no two people sense anything the same.

Several factors, including genes, skin type, and diet are related to how smells smell. Even the weather can alter an odor.

Smell disorders most often stem from injuries to the head and upper respiratory infections. Other causes include hormonal disturbances, dental problems, and exposure to chemicals such as insecticides and solvents can also cause smell disorders. Radiation for treating head or neck cancer can create smelling problems as well.

A nose that's in less than tip-top condition can affect taste buds too. Researchers say 80 percent of the flavors we taste come from what we smell, which is why foods become relatively flavorless when we're plugged up.