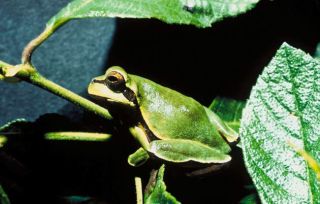 Kermit the Frog often said being green isn’t easy. He had no idea how complex it really is.

The chromatophores stack on top of each other. Melanophores make up the bottom layer. They contain melanin, a pigment that appears dark brown or black. Melanin also tints human skin.

((ImgTag||right|null|null|null|false))On top of these cells sit iridophores.  Although iridophores don’t actually produce pigmentation, they reflect light off of the surface of purine crystals inside the cells. When light hits these cells, they produce a silvery iridescent reflection in frogs, as well as other amphibians, fish and invertebrates.

In most green frogs, sunlight penetrates through the skin to the little mirrors in the iridophores. The light that reflects back is blue.

The blue light travels up to the top layer of cells called xanthophores, which often contain yellowish pigments. The light that filters through the top cells appears green to the human eye.

Many frogs depend upon their skin color for defense against predators.

The layers of pigment cells can alter the color of a frog’s skin from bright green to dark brown. This talent helps a frog blend in with its environment.

The cells are contortionists. Hormones in the frog can change the cells’ shape, move around the pigment inside the cells, and alter the intensity of light coming from them.

As a frog leaps from a bright green leaf to a muddy brown pond, the cells in its skin adjust the frog’s hue to match and keep the frog hidden.