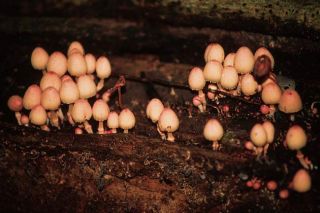 From space, Earth looks blue and green. But put your nose to the ground, and you'll probably see just brown.

Where does the brown ground come from? Green plants, a new study reveals.

As plants wilt and die, their leaves and limbs drop off, bringing carbon that they've stored for a living to the soil.

Tiny microbes in the earth rip the dead plants apart with specialized enzymes, which break the chemical bonds in the plant material, cutting meals into the perfect size for microbes.

The hungry microbes process a large amount of the carbon in the soil, even incorporating some of the element into their own cells.

As busy as they are, microbes can't get all the work done.

"They're not quite a hundred percent efficient," said Steven Allison, an ecologist at the University of California, Irvine. "There's carbon that doesn't get eaten by a microbe and there's carbon in their biomass. Then they die. That carbon then goes into the soil. It's a cycle, there's always carbon left over. This small bit of inefficiency accumulates over time."

The microbes' abundant leftovers, called humic materials, have piled up over thousands of years. The hoard of microbes' carbon scraps gives earth its dirty brown color. Carbon absorbs most colors in sunlight's spectrum, reflecting back only brown light.

The ground isn't brown all around the world, however. Some deserts appear sandy white. Hawaii's soils, rich in iron, have a reddish tint. Dig down beneath some brown dirt and you'll find other colors below.

"If there isn't so much carbon in the ground, soils appear yellow, red, and gray. They take on the color of the minerals that make up the soils," Allison told LiveScience.

The findings are detailed in the June 2006 issue of the journal American Naturalist.