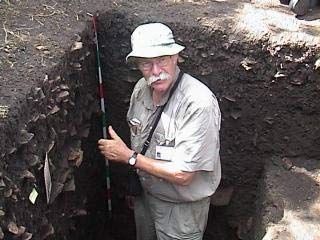 The late Wim Sombroek (ISRIC, The Netherlands) is seen here during an expedition to study the soil and artifacts of an Amazonian dark earth near Manaus, Brazil.
(Image: © Cornell University, Johannes Lehmann)

ST LOUIS—Black soil created by humans long ago could brighten the future of modern farming and help curb global warming.

The dark earth, called terra preta, was produced by Amazonian people who slowly burned their waste by smoldering it, thousands of years ago.

Archaeologists from the University of Sao Paulo in Brazil believe this soil was never used or intended for farming purposes by early Amazonian populations, but scientists have found it to be highly fertile. Today, Amazonian farmers reap the benefits of this carbon-rich soil.

"These indigenous people were not farmers. The potential has just been lying in the soil waiting for modern farmers to discover it," archaeologist Eduardo Goes Neves told LiveScience.

Scientists say terra preta can do much more than a box of Miracle-Gro. The process of making it pulls carbon out of the atmosphere, and can reduce global warming.

"The knowledge we can gain from studying the Amazonian dark earths, found throughout the Amazon River region, not only teaches us how to restore degraded soils, triple crop yields and support a wide array of crops in regions with agriculturally poor soils, but also can lead to technologies to sequester carbon in soil and prevent critical changes in world climate," said Johannes Lehmann, a biogeochemist at Cornell University.

Lehmann and Neves reported their findings here last week at the annual meeting of the American Association for the Advancement of Science.

The remaining terra preta resources are in high demand by local Brazilian farmers who use it to boost crop production.

With Brazil's population close to 200 million, and limited amounts of terra preta, scientists are concerned that farmers will quickly exhaust the reserves and harm precious archaeological sites in the process.

The smoldering method of burning waste called slash-and-char—similar to the process used by ancient Amazonians—reduces greenhouse gases by capturing carbon from the air and storing it in the ground. It also cuts down methane and nitrous oxide emissions from soils.

Alternatively, in most parts of the world, farmers use slash-and-burn methods to prepare fields and crops, which release greenhouse gases. Adopting a slash-and-char approach could result in a 12 percent reduction in carbon emissions by humans, Lehmann said.

To curb the archaeological destruction in Brazil and improve agriculture production worldwide, researchers have come up with a modern method of creating this black magic earth.

Take some normal soil, add a handful of charcoal, a bunch of leaves and a dollop of cow poop.

"Bio-char has these very efficient properties of retaining nutrients. It will retain more carbon in the soil better than any uncharred organic matter," Lehmann said.