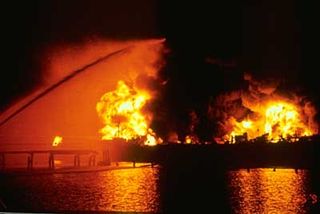 The Jupiter was offloading gasoline at Bay City, Michigan on September 16, 1990, when a fire started on board the vessel.
(Image: © NOAA)

The Mega Borg released 5.1 million gallons of oil as the result of a lightering accident and subsequent fire. The incident occurred 60 nautical miles south-southeast of Galveston, Texas, on June 8, 1990, while the Italian tank vessel Fraqmura was lightering (transferring oil to) the Norwegian tank vessel Mega Borg.

The Jupiter was offloading gasoline at Bay City, Mich., on Sept. 16, 1990, when a fire started on board the vessel. The fire reportedly burned for three days.

The Ixtoc I exploratory well blew out on June 3, 1979 in the Bay of Campeche off Ciudad del Carmen, Mexico. By the time the well was brought under control in 1980, an estimated 140 million gallons of oil had spilled into the bay. The Ixtoc I is currently #2 on the all-time list of largest oil spills of all-time, eclipsed only by the deliberate release of oil, from many different sources, during the 1991 Gulf War.

The Exxon Valdez ran aground on Bligh Reef in Prince William Sound, Alaska, on March 24, 1989, spilling 10.8 million gallons of oil into the marine environment. It is currently #53 on the all-time list of largest oil spills.

The Cibro Savannah exploded and caught fire while departing the pier at the CITGO facility in Linden, New Jersey, on March 6, 1990. About 127,000 gallons of oil remained unaccounted for after the incident: no one knows how much oil burned and how much spilled into the environment.

On Nov. 1, 1979, the Burmah Agate collided with the freighter Mimosa southeast of Galveston Entrance in the Gulf of Mexico. An estimated 2.6 million gallons of oil was released into the environment; another 7.8 million gallons was consumed by the fire onboard. This spill is currently #55 on the all-time list of largest oil spills.

The Amoco Cadiz ran aground off the coast of Brittany, France on March 16, 1978, spilling 68.7 million gallons of oil. It is currently #6 on the list of the largest oil spills of all time.