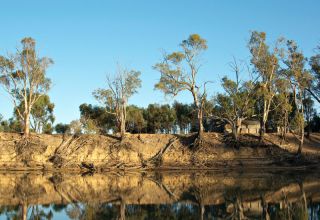 Plants have helped shape our planet. New research indicates the first arrivals on land not only helped alter nutrient cycles, but contributed to one of Earth's mass extinctions. And as plants evolved, so did rivers, creating more habitats for green things and the animals that followed.

This is further evidence that the Earth has been molded by more than physical processes, write the editors of journal Nature Geoscience in an editorial accompanying two new studies. The findings help explain why Earth is probably unique in the universe: because it co-evolved with the life that inhabits it.

"Without the workings of life, the Earth would not be the planet it is today," they write in an editorial published online Wednesday (Feb. 1). "Even if there are a number of planets that could support tectonics, running water and the chemical cycles that are essential for life as we know it, it seems unlikely any of them would look like Earth."

This happened relatively recently compared to another Earth-shaping event perpetrated by tiny microorganisms that share plants ability to photosynthesize, or use sunlight to produce sugar. About 2 billion years earlier, cyanobacteria, also called blue green algae, are believed to have begun pumping oxygen into our atmosphere as a by-product of photosynthesis.

At roughly this time, perhaps a little later, the planet cooled, glaciers spread and sea levels dropped. The result was the end-Ordovician mass extinction, which decimated the oceans, where life was largely confined at the time.

Before the extinction, the atmosphere had many times the level of carbon dioxide, an important greenhouse gas, we see today. But something caused the carbon dioxide — and subsequently, temperatures — to drop. Scientists say early plants may have contributed.

Plants enhance a process called silicate weathering, which sucks carbon out of the atmosphere and ultimately tucks it away at the bottom of the oceans.

Here's how it works: Caron dioxide in the atmosphere forms carbonic acid. It falls as acid rain, reacting with rocks, which contain silicates, to form bicarbonate. The bicarbonate eventually washes into the ocean and where it forms limestone.

"So, it's almost like a pump that pumps carbon dioxide into the ocean floor," said Liam Dolan, a study researcher and a professor of botany at Oxford University in the United Kingdom. "The ocean floor is where it's sequestered."

Plants help in multiple ways. To get the nutrients they need, plans secrete acids that dissolve rocks, releasing the needed minerals. Later, when roots evolved, plants began physically breaking up the rocks.

A theory called the "Devonian plant hypothesis" suggests that more complex plants, called vascular plants that arrived on the scene much later, contributed to the Devonian mass extinction by the same cooling mechanism.

Dolan and his colleagues suspected that the earlier pioneers had a similar impact. He and colleagues, including Timothy Lenton of the University of Exeter, tested how a modern moss, Physcomitrella patens, affected the release of elements from two types of rock: granite and the softer andesite. They found that the moss enhanced the weathering comparable to vascular plants.

Using a climate model, they showed that, if plants like the moss inhabited 15 percent of the currently vegetated land between 475 million and 460 million years ago, atmospheric carbon dioxide would drop enough to cause global cooling and trigger the spread of glaciers.

The land plants may also have contributed to the extinction by fertilizing the oceans with phosphorus they released from rocks, Dolan said. This extra phosphorus would have caused the waters to lose oxygen as occurs in modern dead zones, such as in the Gulf of Mexico.

"Thus, the evolution of the first land plants could have indirectly contributed to killing of many of their compatriots in the ocean," the researchers wrote.

Rivers as we know them

Plants also appear to have had a hand in shaping the face of the planet. In the Cambrian Period, more than 500 million years ago, rivers were broad and shallow, and laid down wide, flat sheets. Traces of their banks are elusive in the geologic record. Some have estimated they had width-to-depth ratios on the order of 1,000 to 1, according to Martin Gibling, a professor of earth sciences at Dalhousie University.

The evolution of land plants, along with some help from mud, ultimately gave rivers the sinuous, narrow channels, islands, muddy floodplains and the species-rich corridors associated with modern rivers, at least those left in their natural state, according to Gibling and colleague Neil Davies of the University of Ghent in Belgium. Most modern rivers do not follow their natural courses as a result of human modifications. [Humans Originated Near Rivers]

As the plants caused changes in the riversand the areas around them — by holding banks in place, dropping in woody debris or contributing to soil formation — they also opened up new opportunities for the plants themselves and for animals, like fish.

The first simple plants appear to have arrived on land by around 470 million years ago. Mud— which is more cohesive than sand — showed up around this time, possibly a little earlier. It gave riverbanks more stability, allowing channels to deepen and eventually follow meandering paths. While mud got this process started, it was plants that got it going, according to Gibling.

Plants contribute to the production of mud by breaking down rock, both with acids and, a little later, with their roots, which further stabilized the river banks.

The first signs of meandering rivers emerge around 416 million years ago. As the rivers changed, this created new opportunities for plants themselves, and for animals, like insects and fish.

Around 320 million years ago, sets of narrow channels with rigid banks, appeared.

"Something happens, and we think this is the conifers," Gibling said, referring to cone-bearing trees. These have deep root systems and they appear in the fossil record at about this time.

Woody debris, which had been showing up long before the conifers arrived, also has important effects on rivers. Modern rivers with logs and snags are narrower, slower-moving, and have more stable banks. (European colonists, seeking to make rivers more navigable, removed logs and debris for the opposite result.) The wood also provides important habitat for freshwater fish.

As trees became more abundant, islands, held in place by their roots, began to appear in rivers more than 300 million years ago.

"Organic matter is often not well-preserved into the geological record. It decays away rapidly – even large trees and logs. So, geologists can easily assume that no plants were present," Gibling told LiveScience in an email, noting there is now enough evidence that plants were widespread by the time modern rivers arose. "We need to think more about how this would have affected landscapes."