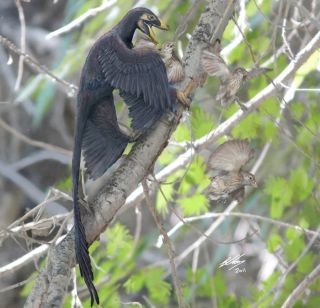 During the Cretaceous Period, around 120 million years ago, the feathered dinosaur Microraptor pounces on a nest of primitive birds (Sinornis) in what is now northern China, in this artist's conception.
(Image: © Brian Choo)

Dinosaurs first emerged about 245 million years ago, and they came to dominate the planet. They included the largest animals ever to walk across the surface of Earth. Their reign came to an end with a bang — a cosmic impact from an asteroid or comet maybe 6 miles (10 kilometers) wide. However, not all of the dinosaurs were killed by this impact — they became the birds that are now found on every continent on Earth.

"Birds are the only dinosaurs that are still alive today," said lead study author Michael Lee, an evolutionary biologist at the South Australian Museum and the University of Adelaide in Australia.

To learn more about how small, graceful fliers such as hummingbirds evolved from massive ground-dwelling theropods, scientists developed a detailed family tree of birds and their dinosaur ancestors, mapping out this evolutionary transformation. They analyzed more than 1,500 anatomical traits from 120 species of early birds and all branches of the theropod family tree, and estimated when the two diverged from each other and how quickly each lineage changed.

The researchers discovered that the branch of theropods that gave rise to modern birds consisted of the only theropods that kept shrinking. In the lineage that led directly to birds, body size decreased during the course of at least 12 different stages over 50 million years or so, from stiff-tailed carnivores known as tetanurans that lived about 198 million years ago and weighed about 359 lbs. (163 kilograms) to Archaeopteryx, long considered the first known bird, which lived about 150 million years ago and averaged about 1.7 lbs. (0.8 kg).

"No other dinosaur group underwent such an extended period of shrinkage," Lee told Live Science.

In addition to this miniaturization, the scientists discovered that bird precursors evolved new skeletal adaptations — such as wings, enlarged brains, smaller teeth and large eyes — four times faster than other dinosaurs.

All in all, "being smaller and lighter in the land of giants, with rapidly evolving anatomical adaptations, provided these bird ancestors with new ecological opportunities, such as the ability to climb trees, glide and fly," Lee said in a statement. "This evolutionary flexibility helped birds survive the deadly meteorite impact, which killed off all their dinosaurian cousins."

Ultimately, "birds out-shrank and out-evolved their dinosaurian ancestors, surviving where their larger, less-evolvable relatives could not," Lee said in a statement.

In the future, the researchers would like "to see these methods applied to help understand rates and patterns of evolution in other groups," Lee said. "For instance, how fast did mammals evolve after the dinosaur extinctions? We know they evolved rapidly, but we don't have exact rates yet."

The scientists detail their findings in the Aug. 1 issue of the journal Science.