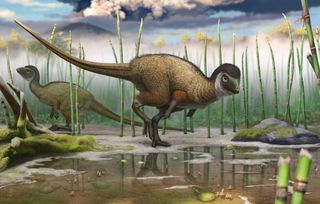 Steven Spielberg's "Jurassic Park" might need a little more revising — a newly discovered dinosaur species offers hints that feathers were much more common among the ancient beasts than once thought.

Researchers unearthed hundreds of fossils of a new genus and species of plant-eating dinosaur called Kulindadromeus zabaikalicus in Siberia that sports both feathers and scales. The finding suggests that most dinosaurs had feathers, which they used for insulation or attracting mates, only later relying on the fringes for flight, according to a study detailed today (July 24) in the journal Science.

"Here, for the first time, we have found featherlike structures in a dinosaur [that] is far from the lineage leading to birds," said study co-author Pascal Godefroit, a paleontologist at the Royal Belgian Institute of Natural Sciences in Belgium. [See photos of these feathered dinosaurs]

Scientists have long known that birds descended from dinosaurs. Since the mid-1990s, paleontologists in China have been finding feathered dinosaur skeletons from about 20 different groups, but they all belonged to a single lineage, theropods, which includes Tyrannosaurus rex and velociraptors. In fact, some scientists believe T. rexmay have sported some feathers itself.

Godefroit and his colleagues found hundreds of skeletons of the same species, from a lineage of plant-eating dinosaurs known as ornithischians, which lived about 160 million years ago during the middle to late Jurassic period. Researchers found the fossils buried in the bottom of what appears to have been a large lake.

"It was a small animal, not very impressive," Godefroit said. It was about 4.9 feet (1.5 meters) long; walked on two long, slender legs; and sported very short arms, he said.

The little dinosaur skeleton was equipped with preserved long filaments resembling downy feathers around its arms and legs. Because the animal couldn't fly, the scientists think these filaments may have served as insulation. The specimen also had more-complex feathers that it may have used to entice mates, Godefroit said. The animal had a long tail, covered in large, thin scales.

The preservation of soft tissues such as feathers and scales is extremely rare, the researchers said, which explains why relatively few feathered dinosaur fossils have surfaced before. "The conditions for preserving feathers are really exceptional," Godefroit said.

"This is the first time birdlike feathers have been found in dinosaurs that are not closely related to birds," said Darla Zelenitsky, a paleontologist at the University of Calgary in Canada, who was not involved in the research. "This unexpectedly reveals that such feathers would likely have been present in most groups of dinosaurs," Zelenitsky told Live Science in an email.

Steve Brusatte, a paleontologist at the University of Edinburgh in Scotland, agreed that feathers probably existed in the common ancestor of all dinosaurs. The idea is not a new one, he said; two other fossils of plant-eating dinosaurs found in China had simple, filamentlike feathers, but it was debatable whether these were related to bird feathers, or evolved independently. Now, this new evidence "seals the deal that feathers were also present in plant-eating dinosaurs," Brusatte told Live Science.

As for the fossil scales, they resemble modern birds' scales, which are actually aborted feathers, the researchers said. In chickens, for example, genes in the skin control the development of feathers. If these genes are modified, the chicken will sprout feathers on its legs, like that of an English chicken. Perhaps primitive dinosaurs had already developed this genetic mechanism of preventing feathers from developing in certain parts of their bodies, Godefroit said.

More fossils must be found in order to determine if other groups of dinosaurs besides theropods and ornithischians had feathers, the researchers said. "We found [feathered fossils] in one locality in Siberia, and we will look around now to see if we can find more," Godefroit said.