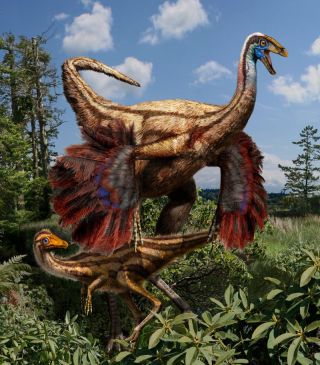 Dinosaurs may have wooed potential mates with flashy feathers, peacock style. Researchers have discovered lengthy wisps on a sexually mature adult, but absent in the toddler specimen of the same dinosaur species.

These findings shed light on the origin of wings and feathered flight, scientists added.

Birds are the last living lineage of dinosaurs. Their predatory dinosaur ancestors and relatives apparently were covered in feathers as well. These downy coats probably helped to keep them warm at first.

It remains hotly debated how the ancestors of birds evolved key traits that allowed them to fly, such as long, strong feathers. To answer this mystery, researchers investigated fossils of a dinosaur called Ornithomimus edmontonicus. These included a turkey-size juvenile about a year old and about 5 feet (1.5 meters) long, and two ostrich-size adults about 10 years old and about 12 feet (4 m) long.

"The most recent ideas about Ornithomimus was that it was herbivorous," said researcher Darla Zelenitsky, a paleontologist at the University of Calgary. "They superficially resembled ostriches, with a toothless beak, large eyes, long legs, long tail, and now we know they had feathers, but these animals were not closely related to ostriches."

The 71-million-year-old bones were excavated from the badlands of Alberta, Canada.

"The climate in the area 71 million years ago was warm and wet, subtropical, very much like that seen today in Florida, Georgia and Louisiana. There would have been swamps and lots of water-loving conifers," said researcher François Therrien, a paleontologist at the Royal Tyrrell Museum of Palaeontology in Canada.

All three Ornithomimus specimens were apparently covered in stringy down — filamentlike feathers up to 2 inches (5 centimeters) long.

"These are the first feathered dinosaur specimens from the Western Hemisphere," Zelenitsky said. "They've never been found in North or South America before — before this, they were previously almost exclusively found in northern China."

In addition, one adult also had markings on its winglike forelimbs that suggest it bore longer feathers, ones that apparently possessed stiff shafts down the middle much like the feathers found on the wings of flying birds today.

"We don't know how long the shafted feathers were on the adult 'wings,'" Therrien said. "But, based on the size of the markings, we think the 'wing feathers' would have been much longer than the filamentous feathers."

Many of the feathered dinosaurs found in China are older than Ornithomimus. However, Ornithomimus comes from a lineage of dinosaurs that arose earlier than some of those unearthed in China. As such, one can consider the "wings" seen in Ornithomimus "the most primitive occurrence of winglike structures in the dinosaurs leading to birds," Zelenitsky said.

Since the younger dinosaur apparently did not possess long feathers on its forelimbs, the investigators suggest these plumes were not used for flight — otherwise, younger, lighter dinosaurs that were more capable of flight might have possessed them. Instead, the fact these feathers were seen only on sexually mature adults hints they may have used them for reproductive activities such as courtship or brooding, much as peacocks use their outrageously large feathers to woo females. Over time, the ancestors of birds may have adapted these long feathers for flight.

Intriguingly, these new fossils were discovered in ancient river deposits, as opposed to the ancient lake deposits where feathered dinosaurs are often found in China.

"River deposits are much more common than lake deposits," Zelenitsky said. "I think it's quite possible that people have not really focused on finding feathered dinosaurs in river deposits because they were expecting to be preserved in the quiet water and muddy conditions seen in lake deposits. This might open up possibilities to find feathered dinosaurs in lots of places where people were not expecting."

The scientists detailed their findings in tomorrow's (Oct. 26) issue of the journal Science.