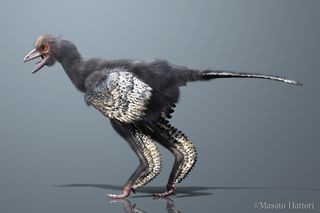 A birdlike dinosaur from the Middle/Late Jurassic of China could be the first of the bird group.
(Image: © Masato Hattori)

The skeleton of a Jurassic dinosaur from China could also be the oldest known bird, scientists report.

The fossil of Aurornis xui was found last year in a museum at the Fossil and Geology Park in Yizhou, China, long after a farmer first dug it up in the Liaoning Province. The feathery specimen represents the most ancient of the avialans, the group that includes birds and their relatives since their split from nonavian dinosaurs.

The research also reconfirms the birdlike fossil Archaeopteryx as an avialan, a classification that was challenged by some recent research. [Avian Ancestors: Dinosaurs That Learned to Fly]

Not everyone agrees that the new specimen is strictly a bird. "In my opinion, it's a bird," study author Pascal Godefroit, a paleontologist at the Royal Belgian Institute of Natural Sciences in Brussels, told Nature News. Even so, he added, "The differences between birds and [nonavian] dinosaurs are very thin."

"Traditionally, we have defined birds as things like Archaeopteryx and closer to things like modern birds," vertebrate paleontologist Luis Chiappe of the Natural History Museum of Los Angeles County, who was not involved in the study, told LiveScience. "If you stick to the definition, this thing is not earliest known bird," Chiappe said, but that's missing the point, he said. What matters, is that it's a very interesting animal that "still helps us understand better the origin of birds," he said.

Aurornis xui was a feathered dinosaur that lived during the Middle Jurassic period about 150 million years ago, analysis shows. It was about 1.6 feet (0.5 meter) from beak tip to tail tip, and possessed small, sharp teeth and long forelimbs.

The creature probably couldn't fly, Godefroit said, but may have used its wings to glide between trees. The fossil's feathers aren't well-preserved, but the hip bones and other features strongly suggest it was a relative of modern birds, he said.

The researchers assert that Aurornis displaces Archaeopteryx as the oldest avialan, placing Archaeopteryx further along in the avialan lineage. Since Archaeopteryx was a flying creature, its placement among avialans means dinosaurs would have only had to develop powered flight once during evolutionary history.

The new findings also classify another family of birdlike dinosaurs, known as Troodontidae, as a sister group to the avialans. This reshuffling of the bird-dinosaur family tree suggests birds and nonavian dinosaurs diverged in Asia during the Middle to Late Jurassic.

The findings are detailed in the May 30 issue of the journal Nature.