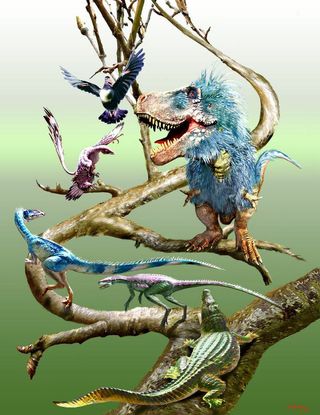 Scientists have found the crouching posture of birds, which allows them to hold their wings high, likely took off after flight evolved.
(Image: © © Luis Rey)

Birds can hold their wings high because of the strange way they crouch, and now scientists say the origins of this folded posture may provide insight into the evolution of their flight.

Birds stand and walk in an unusually crouched way, with the femur, or thighbone, held nearly horizontally — unlike humans, whose legs stand vertically. Birds’ crouched stance helps support their balance and movement by ensuring the center of gravity lies above the feet. Birds’ bipedal, or two-legged, stance reflects their dinosaur heritage — dinosaurs evolved a bipedal posture early in their evolution, about 235 million years ago.

The crouch seen in birds is quite different from the sprawling posture seen in the closest living relatives of birds, the crocodilians. Birds and crocodilians belong to a diverse menagerie of creatures known as the archosaurs, which also include all dinosaurs and the extinct flying reptiles known as pterosaurs. The first archosaurs, which appeared about 250 million years ago, resembled modern crocodiles. Although the archosaurs, like modern crocodiles, were four-legged animals with long, heavy tails, they had longer limbs than crocodiles’ to make it easier for them to live and move on land. [Avian Ancestors: Images of Flying Dinosaurs]

Scientists disagreed on how birds evolved to crouch. Some researchers contend this shift happened gradually in a group of dinosaurs known as coelurosaurs, which included tyrannosaurs and raptors. Others suggest this change occurred more suddenly, beginning with the few immediate dinosaur ancestors of birds and the origin of flight.

To help resolve this debate, scientists explored the bird family by analyzing 3D computer models of 17 archosaurs spanning about 250 million years of evolution. These included living birds, such as chickens; what may be one of the first birds, Archaeopteryx; the four-winged, feathered dinosaur Microraptor; two-legged predators, such as Velociraptor and Tyrannosaurus; and crocodiles, the closest living, albeit still distant relatives of birds.

"We basically started from a simple digital 'shrink wrap' of the whole skeleton," said researcher Vivian Allen, a biomechanist at the Royal Veterinary College in Hatfield, England. "From this, we expanded the 'shrink wrap' to match how much flesh we think existed around the different parts of the skeleton. This was based on both detailed reconstruction of the muscular anatomy of each animal and on what we have measured from CT scans of their living relatives."

Paleontologists had agreed for years that the crouch seen in birds evolved as their tails became shorter, shifting the center of gravity of certain dinosaurs progressively forward as those creatures became more birdlike/This forced the legs to become less vertical and more crouched to keep the center of gravity balanced over the feet. [Paleo-Art: Stunning Illustrations of Dinosaurs]

"Non-avian dinosaurs and archosaurs in general all have this very large, muscular heavy tail, that obviously represents a significant amount of mass on the back of the animal," Allen told LiveScience. "So as you move along the evolutionary lineage of birds, this is reduced in progressively more birdlike dinosaurs and, eventually, is basically lost, or reduced to a small stump. It seems very intuitive to suggest that this loss of the tail, loss of this huge mass towards the back of the animal, would be the main thing responsible for more birdlike dinosaurs and birds themselves having more mass concentrated towards the front of the animal."

Unexpectedly, the researchers found the evolution of this crouch was more linked with their fronts than with their backs.

"Our results suggest enlargement of the forelimbs was more important to the forward shift in center of mass than loss of the tail," Allen said.

"The tail is the most obvious change, if you look at dinosaur bodies," said researcher John Hutchinson, an evolutionary biomechanist at the Royal Veterinary College in Hatfield. "But as we analyzed and reanalyzed and punishingly scrutinized our data, we gradually realized that everyone had forgotten to check what influence the forelimbs had on balance and posture, and that this influence was greater than that of the tail or other parts of the body."

Since the forelimbs of the ancestors of birds eventually became the wings of birds, these findings may provide insight into the origin of bird flight.

"One of the interesting things that our work shows is that birds could not have evolved these large forelimbs, these wings, without also having to make significant changes to the anatomy and function of their hindlimbs," Allen said. "Which makes total sense, when you think about it — everything is attached to the same body, so why wouldn't changing one thing affect the others? But still, it was cool to find that, and to have some actual numbers and stats to back it up."

As to when and how quickly the center of gravity changed position in dinosaurs, the researchers found some merit to both sides of the argument. "There were gradual changes early on in dinosaurs, but we were amazed by how much the increase in forelimb size began altering the center of mass just before when flight may have first evolved in early birds and their closest relatives," Allen said.

Changes in body shape influence how animals balance, "and both shape and balance are important for flight," Hutchinson told LiveScience. For instance, if the center of gravity is close to the wings, "then stable flight, such as gliding, is theoretically possible," Hutchinson said.

Some of the crouching "seems to have started just a bit before when flight seems to have evolved," Hutchinson said. "But it didn't really take off until after flight evolved."

Dinosaur ancestors of birds may have evolved enlarged forelimbs "for reasons other than powered flight, such as prey capture or negotiating complex terrain," Hutchinson noted. [In Photos: Amazing Birds of Prey]

Allen noted that the researchers analyzed only a few relatives of birds. The researchers next plan to scan fossils of more specimens to build computer models of their skeletons and "try and get a clearer picture of what was going on in this really interesting sequence of anatomical evolution," Allen said.

In addition, instead of looking at one or a few aspects of each specimen at any given time — such as its mass, posture, skeletal proportions and muscular anatomy — the scientists hope to analyze every aspect of each specimen together simultaneously in predictive computer simulations that animate their bodies. Such models would help reveal how these extinct animals stood and moved, and how that changed over time.

"Developing techniques for looking at lots of complex data at the same time — computer simulations of how the extinct animal worked as a mechanism — that's definitely the way to go in the future," Allen said.

"It's just hard," she continued. "The maths are hard, and the computing requirements are very high. But we're getting there. What with very, very fast computers being increasingly dirt cheap and the technical skills of researchers getting increasingly very good, there are definitely some very exciting possibilities in the near future of extinct animal mechanics studies."

Allen, Hutchinson and their colleagues, Karl Bates and Zhiheng Li, detailed their findings online April 24 in the journal Nature.