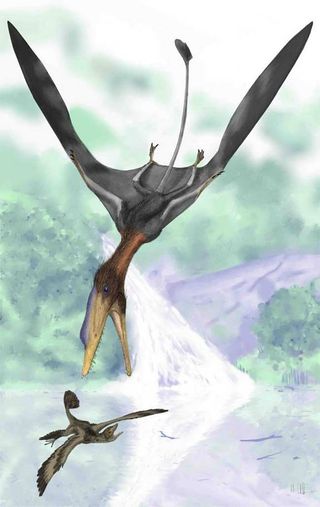 An illustrated reconstruction of the pterosaur Darwinopterus modularis. Reconstructions like these probably aren't the way the wings of these ancient flying reptiles are shaped. Wings like these wouldn't get off the giraffe sized creatures off the ground.
(Image: © Mark Witton, University of Portsmouth.)

With 23-foot wingspans and hefty bodies, the largest of the ancient airborne reptiles of the era of the dinosaurs might seem the unlikeliest of flying machines. In fact, as commonly depicted, the largest of these animals, called pterosaurs, would have been unable to sustain flight, according to new research.

For the first time since pterosaurs were discovered more than 100 years ago, the basic physics of how the largest of them flew are becoming understood. The new research suggests that estimates of giant pterosaur wing size and shape have been wrong, and that, mechanically, the wings would have had to be crescent-shaped and angled much farther forward on the body than has been thought. [25 Amazing Ancient Beasts]

"Something as big a pterosaur is really pushing the limits of what's possible. That's what's interesting from an engineering point of view," study researcher Colin Palmer, of the University of Bristol in the United Kingdom, said to LiveScience. Palmer figured out how these physical boundaries contribute to the size and shape of the pterosaur wings. "It does allow us to have a better idea of how things work and throw away a number of things," he said.

Pterosaurs (meaning "winged lizards") seem to be capable of powered flight even though some were the size of giraffes. They are thought to have ruled the skies for more than 200 million years, until they died out with the dinosaurs 65 million years ago. Their wingspans reached 7 meters — about twice as long as any living bird — and some fossils suggest even larger species of pterosaurs may have lived.

Previous drawings of the animals' possible wing size and shape were based on anatomical limits: For instance, scientists knew from fossils that the pterosaur's wing membrane connected from the ankle to the arm bones and elongated ring finger that form the leading edge of the wing. [Avian Ancestors: Dinosaurs That Learned to Fly]

By analyzing the pterosaur's center of mass (where gravity is pulling down the hardest) and the center of pressure (where lift is pushing up the hardest) in different conformations, Palmer added physics-based boundaries to the possible size and shape of the wings. He found that as depicted in most illustrations, pterosaurs wouldn't have been able to fly. To successfully fly, these two forces must be equal and opposite.

To equalize the two forces acting on the flying pterosaur, the wings would need to be crescent-shaped and angled much farther forward on the body. Palmer also realized that to keep the membrane taut (so it didn't flap back and forth, producing drag) the wings had to have been narrower, to keep the membrane from extending too far back.

"To stop it from flapping in flight, you have to have tension in there. You can only do that by bending the wing bones, like a bow and arrow," Palmer said.

The wing size and shape that Palmer discovered would have given the airborne giants a great amount of stability in the air, without need to constantly correct their course.

These large animals would have spent most of their time soaring over the oceans, Palmer said. This passive stability provided by their wings would have enabled them to exert little effort to correct their flight after a wind gust, for instance. They probably didn't have to flap their wings much, though previous research has indicated they did flap to make their landing.

"When it hits a gust, the wing flexes, the wing bends, in a way to stabilize it," Palmer told LiveScience. "A 7-meter, very flexible wing could actually have flown successfully."

The study was published today (Sept 27) in the journal Proceedings of the Royal Society B: Biological Sciences.

Editor's note: This article was updated to include Colin Palmer's institution, to correct errors in the dates that these specific pterosaurs lived as well as to clarify that the study was looking at only the largest species of pterosaurs.