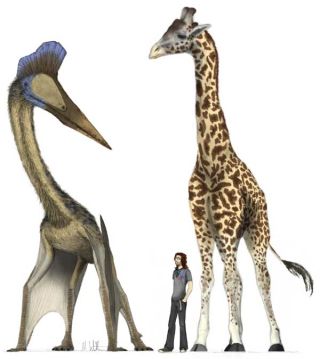 Illustration of a giant 10 meter span pterosaur alongside a record breaking 6 meter tall giraffe. The hollow, expanded skeleton of the pterosaur means that, despite its size, it is only one sixth of the giraffe's weight.
(Image: © Mark Witton.)

The largest flying animals ever known, the ancient pterosaurs, were light, fragile creatures best suited for catching rising air to soar, rather than braving strong winds, and for flying and landing slowly, according to new data from a doctoral student's wind tunnel tests.

"I wanted to understand how these animals flew, and as an engineer one of the first things you do is you measure the performance of the wing, and I realized no one had ever done that before," said Colin Palmer, a former engineer now studying paleontology at England's University of Bristol. His work is published in Wednesday's issue (Nov. 24) of the journal the Proceedings of the Royal Society B.

Pterosaurs had wings composed of a flexible membrane reinforced with fibers, and wingspans of up to 33 feet (10 meters). Palmer, who was once involved in yacht design, said a pterosaur wing has the aerodynamic characteristics of the mainsail of a sailboat, with the equivalent of a ring finger forming the leading edge of much of the wing, but with no additional support for the membranous wing other than its attachment at the ankle.

As an engineer, Palmer worked with wind turbines and electricity generation. He told LiveScience he came to paleontology with an interest in pterosaurs and flight.

Although scientists know from fossils that the wing was composed of a membrane, details were missing from the complete picture of wing anatomy, such as how far back the membrane extended behind the wing bone, Palmer said. It is also not clear how much the wings curved in the plane parallel to the body, an aerodynamic property called camber.

Palmer tested a series of simplified cross-sections simulating possible shapes for the wing in a wind tunnel, a research tool used to study the movement of air as it passes around objects. The resulting data indicated that pterosaurs experienced more drag than anticipated, and confirmed the previous theory that they were slow fliers.

This, in turn, indicates that they were best suited for calm tropical air, riding rising columns of air over coastlines and elsewhere. Their fragile anatomy — their hollow bones had a wall thickness of .04 inches (1 millimeter) — would have required low-speed landings, which the pterosaurs could have accomplished by altering the camber of their wing membranes to slow themselves as they descended, according to Palmer.

While pterosaurs came in many species and in many sizes, down to that of a blackbird, Palmer geared his tests for a generic pterosaur with a wingspan of about 6 meters (19.7 feet).