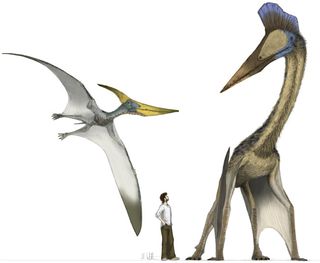 If man had lived 65 million years ago, here’s how he would have measured up to two of the flying reptiles known as pterosaurs. The massive 30-foot wingspan of the toothless pteranodon (left) was surpassed by that of Hatzegopteryx (right) at 40 feet or more. Illustration by Mark Witton.

Millions of years ago, giraffe-sized reptiles called pterosaurs launched into the air with a leap-frog maneuver, relying on all four limbs, suggests a new study that may solve a longstanding mystery.

Though not closely related to birds, pterosaurs (which means "winged lizards") likely were capable of powered flight. They are thought to have ruled the skies from more than 200 million years ago until the mass extinction event 65 million years ago that wiped them out along with most dinosaurs and many other plants and animals.

Once airborne, even the largest of these flyers, such as Quetzalcoatlus northropi whose wingspan reached 35 feet (10 m), could stay aloft by flapping their impressive wings.

But how did pterosaurs lift off the ground?

The researcher says his new study reveals the first line of evidence that pterosaurs launched into the air using four limbs: two were ultra-strong wings which, when folded and balanced on a knuckle, served as front "legs" that helped the creature to walk and leap sky-high.

Mark Witton, a paleobiologist at the University of Portsmouth in England, who was not involved in the current study, says the idea is novel but "makes sense."

"The thought that this whole group of flying animals was taking off with their forelimbs is pretty novel," Witton said during a telephone interview, adding "I think an awful lot of pterosaur researchers will probably take this quite seriously. It's still 'early days,' but it's a worthy idea for future consideration."

Scientists have always considered birds to serve as the fundamental model of flight, and therefore lift-off. As we all know, they use only their two legs to launch and use their wings to fly. In fact, a bird's legs (which help it launch) become "payload" during flight and thus serve as a limit to avian size.

And until now paleontologists had assumed pterosaurs took off in a similar fashion, though the idea of quadrupedal takeoff may have been lightly considered among paleontologists, say at a pub, Witton said.

Study researcher Michael Habib of the Center for Functional Anatomy and Evolution at the Johns Hopkins University School of Medicine in Maryland said that the avian approach to takeoffs is familiar to us today, "but with pterosaurs, extinct 65 million years and with a fossil history that goes back 250 million years, what's familiar isn't relevant."

Since many pterosaurs would have dwarfed modern birds in size, there must be another launch mechanism at work. To find out, Habib compared the bone strength in the limbs of pterosaurs with that of birds.

The results showed pterosaurs had much stronger front limbs than legs. The reverse was true of birds.

Then, Habib entered the measurements into a numerical computer model to figure out how the animals could have lifted their body weight into the air. Let's say a giant pterosaur relied on the avian strategy (bipedal takeoff): "Basically, the bone in the thigh snaps if you put the amount of force on it that's required to get them off the ground just using the hind limbs for the giants," Habib told LiveScience.

He has since run the model with about a dozen more pterosaur species. He said that the smallest pterosaurs could launch with their hind-limbs only, but a four-limb takeoff would be much quicker. For the larger species, with wingspans of perhaps seven feet (2 m) or more, four legs are necessary for takeoff, he said.

"Using all four legs, it takes less than a second to get off of flat ground, no wind, no cliffs," Habib said. "This was a good thing to be able to do if you lived in the late Cretaceous period and there were hungry tyrannosaurs wandering around."

Or perhaps the lift-off would have provided a swift getaway for a pterosaur after snagging a baby Tyrannosaurus rex for a snack.

The next step for pterosaur researchers, Witton said, is to figure out some of the details of this takeoff, including whether the limb joints could feasibly go through the range of motion needed for a four-limb launch, and how the wings would unfurl in this scenario.

The research, funded by the Jurassic Foundation, is published in the current issue of the journal Zitteliana.