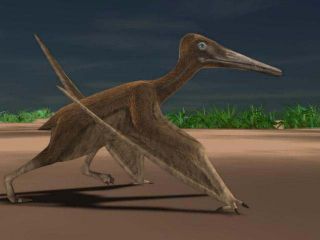 An artist rendering of a pterosaur walking.
(Image: © JM Mazin)

A prehistoric runway for flying pterosaurs has been discovered for the first time.

Scientists uncovered the first known landing tracks of one of these extinct flying reptiles at a site dubbed "Pterosaur Beach," in the fine-grained limestone deposits of an ancient lagoon in southwestern France dating back some 140 million years ago to the Late Jurassic.

The footprints suggest the pterosaur — a "pterodactyloid" with a wingspan roughly three feet wide (one meter) — flapped to stall its flight during landing, and then planted both its two-inch-long feet (five cm) simultaneously at a high angle.

The reptile next dragged its toes briefly, took a short "stutter step" — perhaps a hop with both feet — and landed, settling its hands. It finally adjusted its posture and ambled off normally on all fours.

"No other trackways ascribed to pterosaurs in the world have shown either landings or takeoffs," said researcher Kevin Padian, a paleontologist at the University of California at Berkeley.

Pterosaurs, like birds, "were very light animals, and didn't tend to leave as many tracks when compared to, say, a 50-ton sauropod," the largest dinosaurs to ever stride the earth, explained paleontologist David Hone at the Institute of Vertebrate Paleontology and Paleoanthropology of China in Beijing, who did not participate in this study.

"If tracks from pterosaurs are going to get preserved, it's likely to be in the softest muds or finest sands, and it's unlikely even then, so to get traces of a pterosaur landing like this is very exciting," Hone noted. He added the case the researchers make for the way the pterosaurs landed "is very strong and convincing."

The fact this pterosaur had the capability to stall during flight implies sophisticated flapping control of the wings, Padian said. Future research will hopefully uncover tracks made during takeoff, shedding further light on how these extinct creatures once flew.

"There are hundreds of trackways in this big quarry," Padian said.