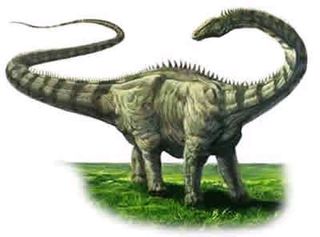 The secret to mega-dinosaurs' impressive sizes may be that the reptiles used more of their energy for growing and less for keeping their bodies warm compared with some creatures. A new model could help explain how some dinosaurs, such as long-necked sauropods, could have achieved masses of around 60 tons — about eight times the mass of an African elephant, the largest land animal alive today. The two main factors that determine vertebrate size are the amount of available food and how the creature expends its energy, said researcher Brian K. McNab, a paleontologist at the University of Florida. For example, elephants can be quite large because they feed off grasses, a relatively abundant food supply as opposed to say, the nectar that hummingbirds and bees consume, McNab said. Energy expenditure depends in part on how an organism controls its body temperature. Mammals and birds, which are warm-blooded, must expend energy to keep their internal body temperatures constant, and so they have a high metabolic rate. But cold-blooded creatures such as reptiles rely on their environment for body heat, and their internal temperature fluctuates depending on the surrounding conditions. Warm-blooded animals must eat a lot more than cold-blooded animals to produce their own body heat. Whether dinosaurs were warm-blooded or cold-blooded has been a hotly debate issue among paleontologists. McNab attempted to answer this question by looking at what food resources were available to dinosaurs, and included this factor in his model that describes how vertebrate size, energy expenditure and food resources tie together. If resources were much more abundant in the Mesozoic Era — the time period when the dinosaurs lived — than today, it may have been possible for dinosaurs to be warm-blooded, even though they would need to eat a lot to maintain their body temperature. Indeed, blue whales, the largest creatures thought to have ever lived on Earth, are warm-blooded. They fuel their 160-ton bodies by feeding off of the plentiful resources in marine environments. However, McNab concluded this was not the case for dinosaurs. "I think it was impossible for [dinosaurs] to have really high metabolic rates like mammals and birds, simply because the resources weren't there," he told LiveScience. For example, there were no grasses in the Mesozoic, which are a major food source for herbivores, McNab said. "How is it that dinosaurs got larger than mammals if the resources were either equal to or poorer than today? My argument is, it's because they took most of the energy they consumed and put it into growth rather than into maintenance of a high body temperature," he said. So were dinosaurs cold-blooded? Not exactly, said McNab. He thinks that dinosaurs were "homeothermic," somewhere in between warm and cold-blooded. They did not have a high metabolic rate, but their internal temperature did not fluctuate like that of cold-blooded creatures. Instead, their sheer size kept their body temperature constant. "When you’re that big, you can’t cool off rapidly like a small lizard will,," said McNab. "You have a large volume, and you have comparatively small surface area. And so if you’re warm, you’re going to stay warm, unless something unforeseen happens." The study was published online in the journal Proceedings of the National Academy of Sciences on July 6.