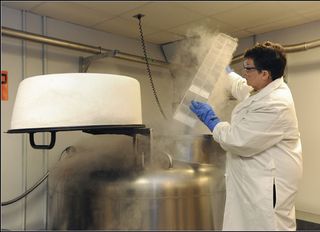 Futurists have proposed that extinct animals could be resurrected some day via cloning of their DNA extracted from bone or frozen tissue.

There is little agreement on this, but a new project to store tiny samples of tissue from endangered animals at New York's natural history museum again prompts questions on whether this approach might be insurance against extinction, not just a valuable data repository for biologists.

In principle, such cloning has already happened. Spanish biologists resurrected an extinct Spanish goat, the Pyrenean Ibex, this year, cloning it from frozen tissue collected before the species’ demise in 2000. The clone survived for seven minutes after birth before succumbing to a lung infection, the British media reported. The limited success ignited hopes that cryogenic collections, like the newly expanding one at the American Museum of Natural History (AMNH), could serve someday as a kind of Noah’s Ark for animals that go extinct.

With room for up to 1 million specimens, the AMNH's frozen tissue lab currently stores frozen butterflies, frog toes, whale skin and alligator hides, among many other samples, in nitrogen-cooled vats. The collection is used today for conservation research — the genetic information gives clues to the breadth of the animals' hunting grounds and breeding behaviors. In an agreement signed this month with the National Park Service, the museum will begin storing tissue samples of endangered animals living in the nation's parks. The first samples — blood from a Channel Islands fox — should be delivered in August, museum officials said.

In theory, the frozen cells could be used for cloning, though for now that is not on any museum scientist's current to-do list.

The scientists who cloned the ibex, for instance, followed in the footsteps of embryologist Ian Wilmut, who introduced the world to Dolly the lamb with a paper in the February 27, 1997, issue of the journal Nature, showing that cloning mammals is possible. Both Dolly and the ibex were cloned by somatic cell nuclear transfer, in which scientists sucked the nucleus from an egg cell, then injected the nucleus of a cell from the animal they wished to clone into the empty shell. They then implanted the cell into the womb of a surrogate mother and waited for the birth of the clone.

“In species such as [the ibex], cloning is the only possibility to avoid its complete disappearance," Jose Folch, investigator with the Aragon Center for Food Research and Technology in Zaragoza, Spain, told the London-based Telegraph newspaper.

That was fine for the ibex, but without well-preserved tissue, cloning extinct animals is even more speculative. Time ravages DNA, and even in a frozen state it can slowly degrade. The bits of DNA salvaged from ancient bone or feathers today are tiny fragments of their owners' complete genomes. A few more of the steps for clonal re-creation are accessible now as scientists try to digitally reconstruct the genomes of woolly mammoths and even Neanderthals.

Researchers have already reconstructed fragments of genetic recipes for extinct animals such as the cave bear, the woolly mammoth and most recently, the moa, a giant bird that was at the top of New Zealand’s food chain until 700 years ago, shortly after the arrival of the Maori.

Last year, scientists at the Max Planck Institute for Evolutionary Anthropology sequenced the complete mitochondrial genome of a Neanderthal that died 38,000 years ago. The mitochondria are the cell's powerhouses that have their own sets of genes.

Those sequences were derived from tissue, bone and feathers that were preserved, but degraded. The technique usually yields only partial sequences. It may only work for samples up to 100,000 years old. After that, time wrecks the DNA beyond use.

Scientists have recently devised another way to sequence ancient genomes using only what they know from those animals' living relatives. "Reverse evolution" is a process that has been used for years to work out the evolutionary history of proteins. But in the past year, a similar technique was applied to genomes.

Benedict Paten and his colleagues at the University of California, Santa Cruz, developed a model that examines the genomes of many individuals from related species, then it tries to walk back in time to deduce the entire genome of the creature that must have come before. Given human and chimpanzee genomes, he said, they could "put them into our computational pipeline and come up with each of our common ancestors." His work was published in the November 2008 edition of the journal Genome Research.

The computer model, like the bone and hair samples, has its limitations and neither method has produced genomes of long-extinct creatures such as dinosaurs.

"Inevitably, even if you were given theoretical access to the genomes of every living organism, some of ancient DNA has left no living descendants," Paten said.

From bits to birth

Even if scientists could have a complete genome in hand, they would still have to turn the code into a clone.

"Fifteen years ago, the most difficult part of all this was getting the genome sequences, and now we’re kind of over that. It’s really hard and costs a lot of money but it can be done,” said Rob DeSalle, curator of entomology at the museum (AMNH) and editor-in-chief of the new journal Mitochondrial DNA.

In 1998, DeSalle published a book about the science behind Michael Crichton's “Jurassic Park,” and joked recently that not much has changed since then. "There’s this big canyon that you have to get through from sequencing to putting the nucleus into the egg," DeSalle said.

First, chemists would have to create the proper genes. Next, DeSalle said, you have to somehow arrange those genes on a biological scaffolding, sorting them into chromosomes.

With the mammoth, he said, "it’s a 10,000-piece puzzle, a really hard puzzle to put together when you have all these tiny fragments. To my knowledge I’m not aware of how someone would do that."

Finally, you have to fold the chromosomes precisely to mimic those of the extinct animal. After taking those still-theoretical steps, the DNA could possibly be injected into an empty egg cell to begin reproduction. Paten pointed out that, as with genetic diseases in animals today, even the smallest error in any of these steps could be disastrous.

If there is no nucleus available for a nuclear transfer and it is too hard to create DNA from a genetic sequence, a third route might be possible.

George Church, a geneticist at Harvard Medical School, has proposed that ancient genes could be inserted into the DNA of the animal's living descendants. In that way, a mammoth could be constructed by knocking out the relatively hairless genes of a modern elephant, say, and inserting the genes for hairy hides of a mammoth, and so on, until you have a close approximation of an extinct animal.

However, the gap from the computer screen to the womb is still too wide to cross, and some scientists wonder why we would even try.

"We shouldn’t mix up what might be done with what ought to be done," said Dr. David Ehrenfeld, a medical doctor and biology professor at Rutgers University.

Ehrenfeld argues that reintroducing animals into environments where they once thrived is costly, and animals raised in captivity often fail to adapt when they are released. Therefore, he said, future attempts to release clones of extinct animals into the wild will be too expensive and probably won’t work.

Others who spoke to LiveScience agreed that the problems, for now, are insurmountable. Cloning Neanderthals, for example, is an ethical quagmire, Paten said. DeSalle argued that money spent on cloning extinct animals could be more wisely spent; improving agriculture, for example, will be vital to feed growing populations.

There is an easier fix, Ehrenfeld said: "It’s always better to save something than it is to fix it after it’s gone."