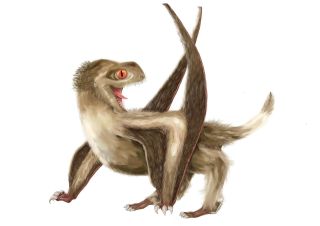 An illustration of one of the feathery, short-tailed pterosaurs.
(Image: © Yuan Zhang/Nature Ecology & Evolution)

There's no doubt anymore: Pterosaurs — the flying reptiles that zipped through the skies during the dinosaur age — sported feathers, a finding that pushes the origin of these fluffy structures back 70 million years.

"The pterosaurs had four types of feather-like structures: simple filaments ('hairs'), bundles of filaments, filaments with a tuft halfway down and down feathers," study lead researcher Baoyu Jiang, a professor of paleontology in the School of Earth Sciences and Engineering at Nanjing University in China, told Live Science in an email. [Photos of Pterosaurs: Flight in the Age of Dinosaurs]

Pterosaurs lived alongside dinosaurs from about 230 million to 66 million years ago, or from the Triassic period to the Cretaceous period. Although pterosaurs are often illustrated as scaly reptiles, researchers have known for some time that certain groups of them were covered with furry-looking structures known as "pycnofibers." But it was long thought that pycnofibers were different from the feathers sported by nonavian dinosaurs and birds.

Both specimens — which are nearly complete and even have fossilized soft tissues — date to around 165 million to 160 million years ago, Jiang said. It's unclear if these two specimens are the same or different species, but scientists are working to figure that out, Jiang said.

Jiang and his international team have several ideas for how pterosaurs may have used their feathers. For instance, the feathers might have served as insulation for pterosaurs , or perhaps they used these feathers for tactile sensing or for streamlining flight, he said. A look at the melanosomes (melanin-bearing organelles) in the specimens revealed that these feathers were likely reddish brown. So, the pterosaurs could also have used their colorful plumage for camouflage or signaling, Jiang said.

Pterosaurs aren't the only ancient creatures to sport these kinds of feathers. "These four types are now also known from two major groups of dinosaurs — the ornithischians, which were plant-eaters, and the [carnivorous] theropods, which include the ancestors of birds," Jiang said.

Given that researchers have found many fossils of feathered dinosaurs (including from the Yanliao Biota), perhaps pterosaurs and dinosaurs shared an ancient, common ancestor that had feathers, the researchers said. However, it's also possible that feathers arose independently in the pterosaur and dinosaur lineages, they noted.

The "stunning" discovery "seals the deal — pterosaurs had feathers," said Steve Brusatte, a paleontologist at the University of Edinburgh in Scotland, who was not involved in the finding.

"If you just looked at pictures of the fluffy stuff on these new pterosaurs, you would think they were the feathers of a feathered dinosaur," Brusatte told Live Science in an email. "Some of them even branch — this is a highly unique feature of feathers, which hadn't been seen previously in pterosaurs."

The next logical step is to see whether ancient crocodiles had feathers, Brusatte added. Although modern crocodiles obviously lack feathers, and scientists can't make crocs grow feathers (they've tried), crocodiles do have the same "feather-development" genes that birds do, Brusatte said.

"So, maybe, just maybe, a paleontologist will one day find a fossil croc with feathers. Even if that never happens, I think these new pterosaurs make the case even stronger that most dinosaurs — if not all dinosaurs — had some type of feather, and that their close cousins did too. Mammals have hair, dinosaurs and pterosaurs have feathers, and that's how it goes."