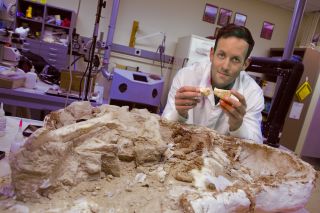 Dinosaurs were once thought to be the cold-blooded kings of the Mesozoic era. But new research on their growth rates suggests the prehistoric beasts grew just as fast as mammals, indicating they were warm-blooded creatures.

However, not everyone agrees with the results, and some paleontologists suggest dinosaurs fell in the middle of the cold-blooded (ectotherm) and warm-blooded (endotherm) spectrum, making them intermediate-blooded (mesotherms).

Dinosaurs are considered reptiles, so scientists had assumed the beasts were cold-blooded like their kin, meaning they depended on their environments to regulate their body temperature. The sluggish metabolism of such a cold-blooded dinosaur would have forced it to lumber slowly across its ancient scape. A warm-blooded dinosaur, however, would have controlled its own body temperature and been equipped with a quicker metabolism. Such a behemoth could have jaunted around its home.  [Paleo-Art: Dinosaurs Come to Life in Stunning Illustrations]

Researchers have debated thermoregulation in dinosaurs for decades, but the new debate began with a 2014 study in the journal Science saying that dinosaurs were likely mesotherms. In fact, previous studies on dinosaurs' energy rates, energy consumption and teeth also have found evidence suggesting they were warm-blooded. The answer to this question is not just for scientific journals; rather, it would paint a more complete image of how dinosaurs lived and died, researchers say.

In an attempt to settle the debate, researchers studied fossilized dinosaur bones. These bones have growth rings, which, like the rings of a tree, are thought to indicate how quickly or slowly the animals grew. The researchers compared the dinosaurs' growth rates with those of both extinct and living animals, and found that the dinosaurs fell right in the middle of the growth continuum between warm- and cold-blooded creatures.

But that study has two big problems, said Michael D'Emic, author of the new study and a research instructor of anatomical sciences at the Stony Brook University School of Medicine in New York.

When D'Emic reanalyzed the data using different techniques, he was "surprised that the conclusion was pretty dramatically different. Rather than dinosaurs being in a special intermediate category between cold-blooded and warm-blooded animals, they actually fit right in — metabolically and in terms of growth — with mammals," D'Emic told Live Science.

First, D'Emic noticed that the 2014 study's researchers calculated daily growth rates, but dinosaur growth rings likely describe yearly growth (as they do in many living animals). This helped them standardize comparisons among animals, especially ones that grew to maturity within a year, with others that took years to grow up, D'Emic said.

"But the problem that my paper points out is that the animal is actually not growing for about half the year, on average "— for instance, during cold or dry seasons, he said. "So, instead of dividing by 365, they really should have divided by something like 180, therefore roughly doubling the growth rates that they inferred for dinosaurs."

Second, the original study's researchers didn't group birds (which are warm-blooded) with dinosaurs, even though birds likely evolved from theropods, a group of mostly meat-eating, two-legged beasts that includes Tyrannosaurus rex.

"Separating what we commonly think of as 'dinosaurs' from birds in a statistical analysis is generally inappropriate, because birds are dinosaurs — they're just the dinosaurs that haven't gone extinct," D'Emic said in a statement.

When D'Emic doubled dinosaur growth rates and added birds into the calculations, the beasts ended up with growth rates that looked a lot like warm-blooded mammals, he said.

But the original authors aren't buying it — a point they make clear in their response to D'Emic, published in Science.

"We would like to state clearly that we disagree with his central criticisms, and we emphasize that all of our original conclusions stand," John Grady, the original study's lead researcher and a doctoral candidate at the University of New Mexico, said in a statement emailed to Live Science. [Wipe Out: History's Most Mysterious Extinctions]

D'Emic's arguments are inconsistent, Grady said. Many animals grow seasonally, and so in that vein, the growth rates of all vertebrates in the study, not just nonavian dinosaurs, should be doubled, he said.

"In that case, the relative differences are maintained, and dinosaurs still grow intermediate to endotherms and ectotherms," Grady said.

Moreover, the original study did not group birds with nonavian dinosaurs and Archaeopteryx (a transitional species between dinosaurs and birds) because they are substantially different.

"The evidence from growth is clear," Grady said. "Dinosaurs were not as metabolically turbocharged as their living feathered relatives."

Other researchers are more convinced by the new warm-blooded analysis. Those researchers have pointed out that dinosaur growth rates may not be as consistent as those of other animals, and that it's fair to include birds with dinosaurs. But more evidence is needed to make the final call on thermoregulation, experts say.

For one thing, both studies used the same data set, which included bones from several dozen dinosaurs from about 21 species. (To put that into perspective, there are more than 700 known species of dinosaur.) The data set also included the entire Mesozoic, a time period spanning more than 180 million years.

"When you say 'dinosaurs of the Mesozoic,' you're talking about an immense array of animals from an immense span of time," said Kenneth Lacovara, a professor of paleontology and geology at Drexel University in Philadelphia who was not involved in either study.

Perhaps some dinosaurs were warm-blooded and others were mesothermic, but analyses of specific clades (species that share a common ancestor), environments and time periods are needed to determine separate metabolism and growth rates, Lacovara said.

Also, scientists will need multiple findings pointing to warm- or cold-blooded activities before they can definitively say whether dinosaurs were endothermic, mesothermic or ectothermic.

"There are lots of other indications that nonavian dinosaurs led very active, vigorous lives that are comparable to birds and mammals," Lacovara said. For instance, some had anatomy suggesting they ran quickly, and others left behind trackways suggesting they migrated, as many mammals do.

"I think [the new analysis] is a step in the right direction," Lacovara said. "It's immensely complex, and we need to keep adding nuances and complications and additional data to get this."

The new analysis was published May 29 in the journal Science.