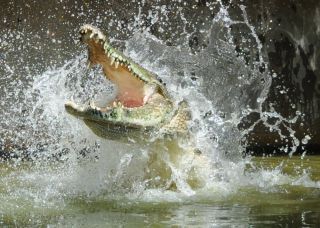 Crocodiles may look fierce, but they tire out surprisingly quickly in comparison to other warm-blooded animals of their size.
(Image: © Grahame Webb, Wildlife Management International)

Dinosaurs may have produced their own body heat, making them warm-blooded, new research suggests.

The dinosaurs would have needed warm blood to fuel their muscles as they chased prey or fled from other dinosaurs, according to the new study.

The study, published July 5 in the journal PLOS ONE, compared several thrashing crocodiles' maximum energy output with that of similar-size, yet warm-blooded, mammals. The biggest crocodile produced only one-seventh of the muscle energy of mammals of similar size, suggesting cold-blooded physiology couldn't have kept up with large dinosaurs' active lifestyles.

"If you imagine a crocodile as a model dinosaur and pitted it up against a mammallike dinosaur with a mammalian physiology, it would be clear who would win the contest: The mammal would," said study co-author Roger Seymour, a plant and animal physiologist at the University of Adelaide in Australia.

For decades, scientists believed dinosaurs were cold-blooded, or drew heat from the environment. Because they were fairly large and the temperature was warmer millions of years ago, the beasts could have kept a fairly stable body temperature by simply basking in the sun during the day and letting their bodies cool down very slowly at night. [Paleo-Art: Dinosaurs Come to Life in Stunning Illustrations]

So, researchers argued, cold-blooded dinosaurs may have had an edge, because they could regulate their body temperature externally without having to gorge on quite as much food.

In the 1990s, Seymour and his colleagues decided to test the endurance of big cold-blooded animals. In the dead of night, they ventured by boat into crocodile-infested waters in northern Australia. They would shine their flashlights into the crocodiles' eyes, and then loop a cord around the animals and watch them struggle.

Because the crocodiles perceived the capture as a life-or-death situation, they thrashed until exhaustion, at which point the boat dragged them ashore. The researchers then tied the crocodiles' snouts shut and took blood and muscle samples to measure how much energy their muscles had produced.

The bigger the croc was, the punier its muscles were.

It turns out that the mitochondria, the cellular energy powerhouses that fuel warm-blooded metabolism, also allow for much more powerful, sustained muscle contractions.

The findings suggest dinosaurs had to be warm-blooded to dominate the ecosystem for 180 million years, Seymour said. They may also explain why mammals were small during the Cretaceous Period, but grew to be massive soon after the dinosaurs died off.

The study makes a good point, but isn't definitive, said Peter Dodson, an anatomist at the University of Pennsylvania who was not involved in the study.

"It's not going to lay the question to rest," Dodson said.

The trouble is that the entire study hinges on one animal: crocodiles. But there aren't many other big reptiles with which to compare dinosaurs, Dodson said.

It's also possible that small meat-eating dinosaurs needed to be warm-blooded to chase down prey but that the bigger herbivores were still cold-blooded, Dodson added.