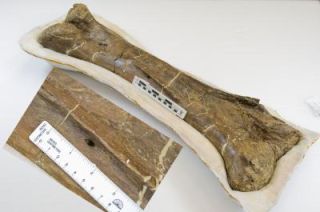 Rather than plodding along Earth like slowpokes, dinosaurs likely were pretty active beasts, even more so than today's mammals, researchers have now found.

The finding, which was based on tiny holes that would've supplied blood and oxygen to dinosaur bones, supports the idea that at least some dinosaurs may have been warm-blooded, the researchers say.

"One of the big controversies among paleobiologists is whether dinosaurs were cold-blooded and sluggish or warm-blooded and active," study researcher Roger Seymour of the University of Adelaide said in a statement.

To find out, researchers began measuring nutrient foramen, or the tiny holes located in thigh bones. The holes supply blood to the living bone cells inside, with past research suggesting the size of the holes in human bones is related to the maximum rate that a person can be active during aerobic exercise. [Image of dinosaur bone with tiny holes]

"Far from being lifeless, bone cells have a relatively high metabolic rate and they therefore require a large blood supply to deliver oxygen," Seymour said. "On the inside of the bone, the blood supply comes usually from a single artery and vein that pass through a hole on the shaft – the nutrient foramen."

Seymour and colleagues applied this principle to evaluate the activity levels of dinosaurs.

The researchers then measured the holes in 10 species of dinosaurs from five different groups, including bipedal and quadrupedal carnivores and herbivores. The dinosaurs varied in weight from about 100 pounds (50 kilograms) to 44,092 pounds (20,000 kg).

On a relative comparison, to eliminate the differences in body size, all of the dinosaurs had holes in their thigh bones that were larger than the nutrient foramen of mammals. These holes suggest that dinosaurs were even more active than modern-day mammals, the researchers said.

"We certainly didn't expect to see that," Seymour said. "These results provide additional weight to theories that dinosaurs were warm-blooded and highly active creatures, rather than cold-blooded and sluggish."

Other recent studies support this theory as well. An analysis of isotopes in sauropod teeth published in the journal Science on June 23 found that the dinosaurs had the same body temperature as humans.

The study is published in the July issue of the journal Proceedings of the Royal Society B (Biological Sciences).