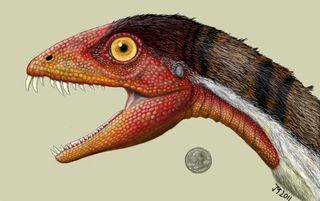 A newfound carnivore whose name means "the evil spirit reptile with outstanding teeth" suggests the dinosaur lineage that included the mighty T. rex experimented with its skull shape more than thought, researchers said.

The dinosaur in question, Daemonosaurus chauliodus, dates back to the end of the Triassic Period, approximately 205 million years ago. This makes it an early member of the theropods, or "beast-footed" dinosaurs, the lineage later comprising all the carnivores, including Tyrannosaurus rex.

However, based on the nearly complete skull and some vertebrae and ribs that were discovered in New Mexico, Daemonosaurus was more likely a dead end than a missing link to theropods that came after it. Its short, deep snout and unusual teeth make it quite different from contemporary long-snouted, smaller-toothed neotheropods, the ancestors of giants such as T. rex.

"It would seem that Daemonosaurus represents a lineage that did not extend into the later Mesozoic," said researcher Hans-Dieter Sues, a vertebrate paleontologist at the National Museum of Natural History. [Image of Daemonosaurus]

The newfound dinosaur's fearsome name comes from the Greek "daimon" for "evil spirit," "sauros" for "reptile," and "chauliodus" for "outstanding teeth." The name alludes to legends of evil spirits at Ghost Ranch in New Mexico, where the remains of this species were discovered, and to the large, serrated front teeth found in its upper jaw.

"The huge front teeth of Daemonosaurus would have been useful for seizing and killing prey," Sues told LiveScience. Moreover, its short, deep snout "suggests powerful biting."

Based off the size of this skull and the bodily proportions of other early dinosaurs, "I would estimate an overall length of 5 feet, as most of these animals have really long tails, and Daemonosaurus would have stood as tall as a large dog," Sues said.

The findings reveal that theropods experimented with a variety of skull shapes early in their evolution, attaining considerable diversity during the Late Triassic. This likely helped coexisting species fit into a variety of niches and compete for different prey.

The environment in which Daemonosaurus lived was very warm, with seasonal rainfalls. Sues noted "there was a smorgasbord of other vertebrates" at the site on which this predator could have fed.

"At Ghost Ranch, most of the fossils belonged to the more advanced neotheropod Coelophysis [a small carnivorous dinosaur], but there were also fossil remains of numerous other reptiles, including at least two large non-dinosaurian predators, and a variety of fishes," he explained. "The flora, which we know from other occurrences of comparable age, would have consisted of conifers, ferns, and horsetails."

Daemonosauruswas discovered when a large block of mudstone containing numerous remains of Coelophysis was loaned by the Carnegie Museum of Natural History to the State Museum of Pennsylvania. "This block, along with others, was excavated at Ghost Ranch by a team of researchers from several museums in the early 1980s," Sues said. "At the State Museum of Pennsylvania, a lab was set up in the public area where visitors could watch technicians and volunteers uncover dinosaur skeletons in the block. A volunteer found the skull of Daemonosaurus."

"The work took a long time as preparation had to proceed cautiously," Sues explained. "While the mudstone enclosing the bones is soft, the bones are penetrated by many cracks and breaks."

The formative steps of theropod evolution are still poorly understood. The oldest known theropods date back about 230 million years ago in Argentina and Brazil.

Daemonosaurusnow stands as an early example in the lineage, with a skeletal structure intermediate between the first known dinosaurs and later theropods.

"The next step will be further comparisons of Daemonosaurus with other Triassic dinosaurs, especially new fossils found during the last few years," Sues said.

Ghost Ranch is a site that scientists have long examined. "The find shows that even paleontologically well-studied geological formations right here in the U.S. continue to yield previously unknown kinds of early dinosaurs," Sues said.

The scientists detail their findings online April 13 in the journal Proceedings of the Royal Society B.