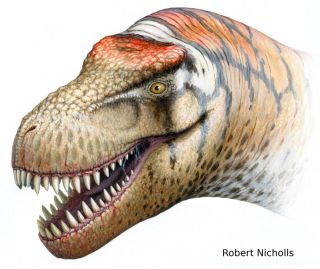 The newly identified T. rex relative probably weighed some 6 tons when it lived in what is now China.
(Image: © Courtesy of Robert Nicholls (copyright))

A long-lost Chinese cousin of T. rex has been discovered, one comparable in size to the legendary predator and one of the largest meat-eating dinosaurs ever found.

The remains of this huge carnivore were discovered in a fossil quarry, which together with nearby sites in eastern China hold one of the largest concentrations of dinosaur bones in the world.

"We named the new species Zhuchengtyrannus magnus, which means the 'Great Tyrant from Zhucheng,' because the bones were found in the city of Zhucheng, in eastern China's Shandong province," said researcher David Hone, a paleontologist at the University College Dublin in Ireland.

Zhuchengtyrannus was a tyrannosaurine, a member of a group of huge theropods, or "beast-footed" dinosaurs, that included T. rex and its closest relatives. They were known for their small arms, two-fingered hands, and large, powerful jaws that could have delivered powerful, bone-crushing bites.

"It's the first China-only tyrannosaurine, and it's one of the biggest ever — there are only five carnivorous theropods bigger by my count," Hone told LiveScience.

The tyrannosaurines were likely both predators and scavengers, and lived in North America and eastern Asia during the late Cretaceous period, which lasted from about 99 million to 65 million years ago. [Dinosaur Graveyard Reveals Oldest T. Rex Relative]

"Zhuchengtyrannus can be distinguished from other tyrannosaurines by a combination of unique features in the skull not seen in any other theropod," Hone said.

The researchers estimated that Zhuchengtyrannus measured about 36 feet (11 meters) long, stood  about 13 feet (4 meters) tall, and weighed close to 13,200 pounds (6,000 kilograms), the weight of a school bus.

"It's a smidge under T. rex-sized," Hone said. "With only some skull and jaw bones to work with, it is difficult to precisely gauge the overall size of this animal. But the bones we have are just a few centimeters smaller than the equivalent ones in the largest T. rex specimen. So there is no doubt that Zhuchengtyrannus was a huge tyrannosaurine."

Most of the other specimens recovered from the quarry where Zhuchengtyrannus was found belong to a gigantic species of duck-billed dinosaur known as Shantungosaurus giganteus, which might have been its prey, as well as some unidentified ankylosaurs. The area was likely once a large floodplain where many dinosaur bodies were washed together during floods and then fossilized, Hone explained.

The bones of Zhuchengtyrannus were found in 2009. "Ironically, they were found by a construction crew digging the foundations for a museum to put the other fossils in," Hone said.

One other, larger tyrannosaurine, known as Tarbosaurus, had been identified in Asia before.

The scientists detailed their findings online yesterday (March 30) in the journal Cretaceous Research.