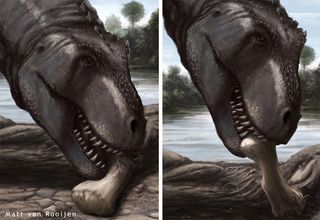 An artist's depiction on how the tyrannosaur known as Tarbosaurus might have scavenged on the upper arm bone of a duck-billed dinosaur.
(Image: © Matt van Rooijen.)

As fearsome as giant tyrannosaurs such as T. rex were, scientists have found what may be the first evidence of these "terrible lizards" being dainty scavengers.

Paleontologists have long argued over whether tyrannosaurs were actually scavengers or hunters. Although their spectacularly large, sharp teeth might seem proof of them being predators, even powerful modern carnivores such as lions engage in scavenging as opportunity allows.

Fossil tooth marks found on the bones of dinosaurs that apparently survived tyrannosaur attacks had been uncovered before, suggesting they did hunt live prey. Evidence as to whether tyrannosaurs also engaged in scavenging is much harder to find, however, since remnants of their meals don't reveal how the carnivores actually came upon their food. That is, unless they are caught in the act, as was the case in a previous study of a Velociraptor frozen in time scavenging on a larger dinosaur.

Now researchers investigating a 35-inch-long (90-centimeter-long) upper arm bone or humerus from the large herbivorous duck-billed dinosaur Saurolophus suggest tooth marks on the fossil are hints that tyrannosaurs were scavengers with a delicate touch.

The roughly 70-million-year-old bone, excavated from the Gobi Desert in Mongolia 15 years ago, had suffered numerous bite marks that were so large they must have come from the tyrannosaur known as Tarbosaurus, the only large predator known from the area and the only carnivore there with such large teeth and so powerful a bite.

The hint that roughly T. rex-sized Tarbosaurus scavenged on Saurolophus as opposed to hunting it down: Only the humerus seemed to have been fed on — the rest of the herbivore's body was intact and unmarked, with the bones in place much as they had originally been in life. If the Tarbosaurus had killed the Saurolophus, how could the rest of the skeleton not have been damaged?

"Modern predators usually start feeding on a fresh kill around the hindlimbs and belly," said researcher David Hone, a paleontologist at the Institute of Vertebrate Paleontology and Paleoanthropology of China in Beijing. "It would be very odd indeed for such a large predator to go to such great lengths to feed on just one arm when there was a whole 12-meter (39-foot) animal to feed on — unless, of course, the rest was inaccessible."

The rest of the herbivore's carcass was likely buried when the carnivore stumbled across it, Hone said. Since its body ended up in a riverbed, sand carried by the river may have covered it. [Image of Tarbosaurus scavenging]

"The environment this Tarbosaurus lived in was a lot like the Okavango Delta in Botswana today — a delta heading down into a desert, essentially, occasionally with fast-flowing water that could quickly bury even a very large dinosaur," said vertebrate paleontologist Eric Sniveley at Ohio University, who did not take part in this research.

As such, the tyrannosaur ate what of the buried duck-bill it could — in other words, it scavenged.

"This is the first definitive evidence of a really big tyrannosaur scavenging something," Sniveley told LiveScience.

"This does not say that tyrannosaurs did not hunt, nor did it say that they were exclusively scavengers or even primarily scavengers, but it does say that at least one scavenged," said dinosaur paleontologist Thomas Holtz at the University of Maryland, who did not participate in this study.

Intriguingly, while the ends of the humerus possessed deep gouges — as had been seen with past remnants of tyrannosaur meals, resulting from the carnivores biting off large chunks of meat and even bone — on the flat surface in the middle, there were extensive shallow scrape marks instead, made by just the front teeth of the upper jaw.

"This shows a surprisingly delicate touch from such a huge carnivore, scraping the muscle off the bone and only leaving such light marks in contrast to the power that it could, and did, deliver to the

ends of the bone," Hone said.

This delicacy on the tyrannosaur's part suggests these hunter-scavengers "were not crude butchers who just bit their way through everything," Hone told LiveScience. "They had some real skill."

It remains a curiosity as to why this tyrannosaur was so picky with its meal when it could have just eaten it whole.

"One possibility is that it takes a lot of energy to digest bone," Holtz said. "Although there's a lot of nutrients in bone, because of the fats in it and the marrow and so on, and we know that they could and did eat bone, in times when food is flush, it might make more sense to go after the meaty parts only."

In the future, paleontologists can go and investigate past specimens for any traces of scavenging they might have missed before, Holtz suggested. "One might even be able to see if scavenging was associated more with one kind of season or another, by looking at the settings in which fossils were deposited, for any little clues as to how the environment may have influenced their lifestyles," he said.

Hone and his colleague Mahito Watabe detailed their findings June 29 in the journal Acta Palaeontologica Polonica.