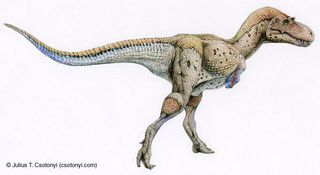 Although past research has suggested Tyrannosaurus rex was related to chickens, now findings hint this giant predator might have acted chicken too.

Instead of picking on dinosaurs its own size, researchers now suggest T. rex was a baby killer that liked to swallow defenseless prey whole.

Fossil evidence of attacks of tyrannosaurs or similar gargantuan "theropods" on triceratops and duck-billed dinosaurs has been uncovered before, conjuring images of titanic clashes.

"Animals such as Tyrannosaurus are often seen as the perfect killing machines with extremely powerful bites, which were able to bring down even the largest possible prey," said researcher Oliver Rauhut, a paleontologist at Ludwig Maximilian University of Munich in Germany.

However, although there were a great many such giant carnivores over the course of the age of the dinosaurs, there are surprisingly few bite marks in the fossil record when compared to the age of mammals. Indeed, details of the scratches and punctures from most examples of dinosaur attacks seem to suggest these collisions between teeth and bone were accidents.

"The very few fossils that reflect the hunt of predatory dinosaurs on large herbivores tell a tale of failure — the prey either got away, or both prey and predator were killed," Rauhut noted.

This all hints that while conflicts between T. rexes and prey likely occurred, these were probably the exception and not the rule.

"We're not saying bloody clashes never happened in dinosaurs," , said researcher David Hone, a paleontologist at the Institute of Vertebrate Paleontology and Paleoanthropology of China in Beijing. "I don't want to detract from the real drama. But we need to look seriously at what was common, and that probably didn't involve T. rex chasing down an 8-ton Triceratops that had meter-long horns to bite it in half."

Instead, Rauhut and Hone suggest large theropods stuck mostly to devouring youngsters, including their bones, thus explaining why fossils bearing toothmarks are rare.

"Unlike their adult and well-armed relatives, these young animals hardly posed any risk to the predators," Rauhut said. "And their tender bones would have added important minerals to a theropod's diet."

The fact that large theropods ate bones is certain. Fossilized dung, or coprolites, from large theropods often contain scraps of bone, suggesting these carnivores gulped down fragments of ribs, vertebrae, and other relatively small bones while feeding. Intriguingly, crocodiles — among the closest living relatives of dinosaurs — have extraordinarily strong acids in their stomachs to completely dissolve the bones of young victims.

As further evidence for their idea, the researchers point out past finds of dinosaur nests "indicate that they contained large numbers of eggs which should have resulted in a high number of offspring," Rauhut said. "But little of this is reflected in the fossil record. Juvenile dinosaurs are surprisingly rare, maybe because many of them have been eaten by predators."

It makes sense that even a mighty carnivore like T. rex would aim young. The very rare finds of stomach contents of predatory dinosaurs suggest that small prey was swallowed whole.

"Even modern predators prefer old and sick animals or unexperienced young individuals," Hone said. "These are an easy prey to bring down and the risk of injury for the predator is much lower. This strategy was probably the same in dinosaurs."

"It seems rather self evident to say something like 'dinosaurs are like all other predators,' yet it has barely been mentioned," Hone told LiveScience.

Vertebrate paleontologist Thomas Holtz at the University of Maryland, who did not participate in this study, found it "quite reasonable that baby dinosaurs were winding up in the guts of theropods. Although placental mammals tend to have very few offspring, especially when they get big, with elephants having a baby maybe every two years, dinosaurs kept popping out babies, which suggests a high mortality rate of the young. At the same time, it makes sense that predators in general go after prey that do them the least damage."

Actually confirming or refuting this idea will be hard, since most of the possible evidence that large theropods preferred youngsters might have been destroyed "by theropods digesting it completely," Rauhut explained.

To gather evidence for their idea, Rauhut suggested "a survey of existing collections and special care to look for fragmentary and possibly stomach-acid edged bones in new excavations." Holtz also suggested looking at dinosaur footprints to see how common tracks of different age ranges were "to get some idea of mortality rates."

Hone and Rauhut detailed their findings online August 3 in the journal Lethaia.