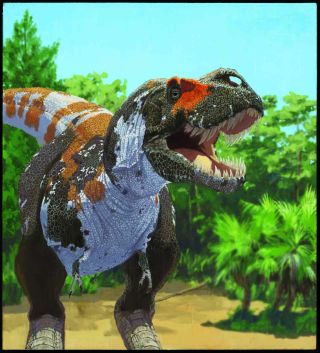 Tyrannosaurus rex is part of the carnivorous groups of dinosaurs that, according to new research, maintained a stable level of biodiversity leading up to the mass extinction at the end of the Cretaceous.
(Image: © AMNH/J. Brougham)

Some dinosaur species were declining long before the 150-million-year-long Age of Dinosaurs ended, scientists find.

Apparently large herbivores such as Triceratops and the duck-billed dinosaurs saw a long-term decline before the catastrophe, but carnivores and other plant-eaters, such as giant sauropods, did not, researchers said. Why some dinosaurs were on their way out while others still thrived just before "the end" may have to do with their locations — whether they lived in North America or Asia, for instance.

The demise of all dinosaurs except birds came about 65 million years ago, when researchers think a giant meteor collided with Earth. Still, it was unclear if mass extinctions started gradually before the impact, perhaps due to volcanoes or other forces.

To explore this question further, vertebrate paleontologist Stephen Brusatte at the American Museum of Natural History in New York and his colleagues investigated seven major dinosaur groups during the end of the Cretaceous, encompassing nearly 150 species. Specifically, they analyzed the variability of the anatomy and body plans within those groups. Groups that show increasing diversity might have flourished in their environments and evolved into more species, while decreasing variability might be a warning sign of extinction in the long term.

"People often think of dinosaurs as being monolithic — we say, 'The dinosaurs did this, and the dinosaurs did that,'" said researcher Richard Butler of Ludwig Maximilian University in Munich. "But dinosaurs were hugely diverse. There were hundreds of species living in the Late Cretaceous, and these differed enormously in diet, shape and size. Different groups were probably evolving in different ways and the results of our study show that very clearly."

The scientists found that biodiversity of large herbivores, including the duck-billed hadrosaur dinosaurs and horned ceratopsid dinosaurs such as Triceratops, seemingly experienced a long-term decline during the last 12 million years of the Age of Dinosaurs. In contrast, a number of other dinosaurs stayed relatively stable or even may have slightly increased in biodiversity, including carnivores such as tyrannosaurs, mid-size herbivores such as the armored ankylosaurs and bone-headed pachycephalosaurs, and truly enormous herbivores, such as sauropods, that gulped their food whole.

The picture of dinosaur biodiversity grows even more complex if one takes different locations into account. Although hadrosaurs apparently declined in North America, their diversity was increasing in Asia during the late Cretaceous. (The Cretaceous Period, which lasted from about 145 million to 65 million years ago, was the last part of the Age of Dinosaurs.) [Dinosaur Detective: Find Out What You Really Know]

"Few issues in the history of paleontology have fueled as much research and popular fascination as the extinction of non-avian dinosaurs," Brusatte said. "Did sudden volcanic eruptions or an asteroid impact strike down dinosaurs during their prime? We found that it was probably much more complex than that, and maybe not the sudden catastrophe that is often portrayed."

A number of factors in North America might have influenced the evolution of dinosaurs there as compared with other continents, including mountain formation and extreme fluctuations in size and sea level of the Western Interior Seaway, a vast inland sea that divided what is now North America in half.

"The mountain-building and changes in the sea would have meant the land area in North America was constantly growing and shrinking, and so it would make sense that animals living on that land would change in an evolutionary sense as well," Brusatte told LiveScience. "It also makes sense that you would see declines in large plant-eaters such as hadrosaurs and ceratopsids first. They were distant relatives, but ecologically they were both doing similar things — they were essentially at the bottom of the food chain, the major dinosaur in terms of the landscape, much more common than other dinosaurs, so it would make sense they would be affected first by any change in the environment."

The researchers note that just because some dinosaur groups might have been in decline before their end "does not automatically mean that dinosaurs were doomed to extinction," said researcher Mark Norell, chair of paleontology at the American Museum of Natural History. "Dinosaur diversity fluctuated throughout the Mesozoic, and small increases or decreases between two or three time intervals may not be noteworthy within the context of the entire 150-million-year history of the group."

Future research will focus on finding more dinosaurs of this age in other parts of the world. "That should help make the picture of the time right before the extinction clearer," Brusatte said.

The scientists detailed their findings online May 1 in the journal Nature Communications.