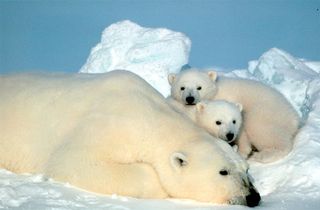 Polar bears, considered doomed if the Arctic sea ice continues to melt, have a fighting chance at survival if humans cut back on their emission of greenhouse gases, according to a new study.

"Our research offers a very promising, hopeful message, but it's also an incentive for mitigating greenhouse emissions," Cecilia Bitz, an atmospheric scientist at the University of Washington in Seattle, said in a statement.

Polar bears were marked as a threatened species in 2008, the year after a study projected that two-thirds of the world's polar bears would be dead within decades if the warming climate kept melting their icy habitat. That study was based on current emissions, according to Steven Armstrup, emeritus researcher with the U.S. Geological Survey, who is also a Polar Bear International senior scientist.

"That was a pretty dire outlook, but it didn't consider the possibility of greenhouse gas mitigation," Armstrup, who led the new study, said in a statement.

Earlier models found that large areas of Arctic ice could disappear in less than a decade. If greenhouse emissions continued as they are now, those studies found, the ice would not recover and could disappear entirely.

Arctic sea ice is crucial to polar bears, providing them access to their favorite food, seals. Without food, polar bears would lose two pounds per day on their way toward starving.

However, the new study, reported Dec. 16 in the journal Nature, finds that if greenhouse gases drop significantly in the near future, bears may not lose their icy hunting grounds. The remaining ice would stay intact through the remainder of the century, and some of the lost ice would re-form, according to the researchers’ new model. That would be enough to ensure the survival of the polar bear species, they wrote.

The 2007 study identified two Arctic regions where polar bears were at particular risk.