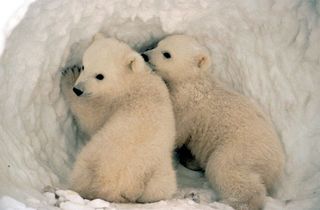 Here two polar bear cubs snuggle up. The polar bears, which evolved from brown bears, originated some 150,000 years ago, according to genetic analyses of a polar bear fossil.
(Image: © U.S. Fish and Wildlife Service.)

DNA from a polar bear jawbone has revealed the Arctic species first originated about 150,000 years ago, scientists announced today.

It has been known that polar bears evolved from brown bears, but until now, it wasn't clear when this happened.

The discovery was enabled by the rare jawbone find on the Norwegian island of Svalbard in 2004. Very few early polar bear fossils have been recovered so far, so their evolution has not been well understood.

"This really gave us a unique opportunity to try to estimate the origin date of the species," said study leader Charlotte Lindqvist of the University of Buffalo. "Polar bears as a species are fairly young and probably evolved fairy recently."

The jawbone, which is between 110,000 and 130,000 years old, provided the key to the polar bears' past, because it offered a sample of genetic material. The researchers drilled into a tooth on the bone to extract mitochondrial DNA, which is DNA from the energy-producing part of the cell called mitochondria. The scientists then sequenced this DNA and compared it with the DNA of modern polar bears, and modern brown bears from Alaska's Admiralty, Baranof and Chichagof Islands, which are the polar bear's closest relatives.

In fact, the polar bear genome the researchers derived is the oldest mammal mitochondrial genome ever to be sequenced. The work was made possible by the most recent genome sequencing technologies, Lindqvist said.

Polar bears are an extremely specialized species. Whereas brown bears are more generalized and can survive in a variety of habitats, polar bears evolved to take advantage of a very specific ecological niche.

"Polar bears are very specialized to the habitat they live in on the edge of the Arctic sea ice," Lindqvist said. "They feed on a few species of seal and are very adapted to that habitat."

This specialization could make it more difficult for them to adapt to the changing climate. The species evolved to live on sea ice, and each year lately there is less and less of it.

"As the arctic sea ice is reduced the polar bears very well may lose lots of habitat," Lindqvist said. "If this trend continues we can only imagine that this must have a dramatic effect for their continued survival. Whether polar bears in the future will be able to adapt to warmer climates is hard to say."

The research was detailed in the March 1 issue of the journal Proceedings of the National Academy of Sciences.