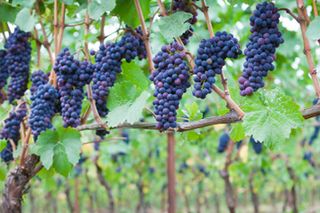 Grapes are versatile fruits used in a wide range of popular foods — from raisins to jelly to wine. They are also packed with nutrients and antioxidants, and have high amounts of the phytonutrient resveratrol, which is good for the heart, according to some studies. In fact, while grapes are good for your overall health, they are especially lauded for their heart benefits.

Grapes are berries that grow on a vine. Because of their versatility, variety and portability, grapes are popular all over the world. More than 72 million tons of grapes are grown annually around the globe — more than bananas, oranges or apples. Only 12 percent of that number goes toward table grapes (grapes grown to be eaten fresh), however. The majority of grapes are turned into wine, according to the University of Missouri Division of Plant Sciences.

Grape growing (also called viticulture) is as old as civilization, according to the University of Missouri. Archaeologists have evidence of grape growing as far back as 6500 B.C. in what are now Georgia, Azerbaijan and Armenia. Grapes and wine were important in dining and social rituals in ancient Egypt, Greece and Rome. Several species of grapes are native to the Americas, most notably the Concord grape.

The richest concentrations of nutrients and antioxidants, including resveratrol, are in the grape skin and seeds, and most scientific studies of grapes have looked at extracts of these parts. That doesn't mean that their findings don't apply to people eating whole grapes, or that eating a whole grape isn't good for you, cautions the George Mateljan Foundation's World’s Healthiest Foods website. Nevertheless, it is good to be aware that grape flesh contains no more than 5 percent of the antioxidants found in the skin and seeds.

Raisins, which are dried grapes, do not contain as many nutrients as fresh grapes, but they do contain four times the amount of sugar. This is because the dehydrating process condenses the sugars and calories and removes some of the nutrients. Therefore, studies on the benefits of grapes cannot be applied to raisins, according to World's Healthiest Foods.

Here are the nutrition facts for grapes according to the U.S. Food and Drug Administration, which regulates food labeling through the National Labeling and Education Act:

"Most of the polyphenols in grapes are flavonoids, which act as antioxidants in the body," said Rumsey. Antioxidants are molecules that safely interact with free radicals to stop the condition of oxidative stress, according to an article in Pharmacognosy Review. Free radicals are molecules that steal electrons from other cells, which causes cell damage and disruption that can contribute to diseases.

"Polyphenols can help promote a healthy heart by increasing HDL [good cholesterol] levels and decreasing inflammation levels in the body," said Rumsey. A 2009 review in the Journal of Nutrition added that polyphenols in grapes could also help reduce the risk of atherosclerosis. Polyphenols are the most abundant antioxidants in the human diet.

The review noted that resveratrol is a polyphenol especially well known for these effects. Its high content in grapes (particularly red grapes) likely explains the"French paradox," in which French people who drink a good deal of red wine enjoy long and healthy lives despite eating saturated fats and smoking. This is likely because of resveratrol's ability to reduce the risk of heart disease through antioxidant and anti-inflammatory activities.

Fiber also helps to lower cholesterol and prevent cardiovascular disease, according to a 2013 review in the BMJ (formerly the British Medical Journal). The digestive process requires bile acids, which are made partly with cholesterol. As your digestion improves, the liver pulls cholesterol from the blood to create more bile acid, thereby reducing the amount of LDL (bad) cholesterol.

"Flavonoids can help protect the heart against blood clots and may reduce the damage of high cholesterol," added Rumsey. A particular flavonoid, called rutin, which is found in grapes, acts as an inhibitor to a protein that is associated with clots. When the protein, called protein disulfide isomerase (PDI), is inhibited, it can block blood clots. This can lead to a reduced risk of heart attack and stroke.

A cup of grapes can provide you with 25 percent of your daily vitamin K needs, and some research suggests that vitamin K might reduce the risk of heart disease. Without it, mechanisms that stop the formation of blood vessel calcification might become inactive. Studies are still inconclusive, however, and one review of them, published in Advances in Nutrition journal, suggested that future research focuses specifically on vitamin-K deficient patients. What is known for certain is that vitamin K is an essential factor in blood clotting. Lack of it can cause hemorrhages, though vitamin K deficiencies are rare.

A 2013 study published in the BMJ suggests grapes may have preventive properties when it comes to diabetes. The study looked at a large cohort of women over the course of nearly two decades and found that a greater consumption of whole fruits, particularly grapes, blueberries and apples was significantly associated with a lower risk of type 2 diabetes. Fruit juice consumption, however, was associated with a higher risk.Animal studies looking at grape seed extract have produced similar findings about the effectiveness of grapes and diabetes prevention.

This possible effect may be due to grape skins' high resveratrol content. According to a 2015 article in Biochimica Biophysica Acta, resveratrol improved insulin sensitivity and glucose tolerance in animal studies.

Rumsey noted grapes' fiber content, which can help ensure smooth digestion. Though one cup of grapes only accounts for 5 percent of your daily fiber needs, it is an easy snack that, when combined with other high-fiber foods, can make a big difference in your regularity and colorectal health.According to the Mayo Clinic, a high-fiber diet may help reduce the risk of hemorrhoids and diverticulitis (small, painful pouches on the colon).

According to a review in Genes Nutrition, the resveratrol in grapes is associated with the expression of three longevity genes. The review noted that muscadine grapes are especially effective in this regard. It also noted that other components in grapes might be affecting the gene expression, because the positive results were seen in those who consumed white wine as well as red.

A small-scale 2010 study published in the British Journal of Nutrition looked at 12 older adults who had memory issues but not dementia. The study found that those who drank one or two cups of Concord grape juice every day for 12 weeks showed "significant improvement of verbal learning" compared to those who did not. Another study, published in the Journal of Nutrition in 2009 reported similar findings.

According to a 2009 review in the Journal of Nutrition, studies have shown that grapes and grape-based products are "excellent sources of various anticancer agents." Of particular note is grapes' possible ability to help prevent breast, colon and prostate cancers. Many studies have linked resveratrol to inhibiting breast cancer cell growth and spread, according to a 2008 Molecular Nutrition and Food Research article.

Vitamin K may play a role in keeping bones strong and preventing breaks or fractures. A study published in the American Journal of Clinical Nutrition found that women who consumed at least 110 micrograms of vitamin K daily were 30 percent less likely to break a hip than women who consumed a lesser amount. According to a study in Nutrition, vitamin K increases the effectiveness of osteocalcin, a protein involved in bone mineralization, and promotes healthy calcium balance.

Research suggests that copper also helps maintain strong bones. A study in the Proceedings of the Nutrition Society explained that copper is essential for enzymes involved in the synthesis of bone components, and could possibly help prevent bone loss.

You want to eat grape skins — it's where the majority of the nutrients are. But grape skins can be covered in pesticides. Grapes rank sixth on the Environmental Working Group's Dirty Dozen list, which compiles the fruits and vegetables with the most pesticides in the United States. Be sure to wash your grapes thoroughly, or try buying organic grapes.

Wine, especially red wine, contains many of the same nutrients as grapes, but be sure not to overdo it. Rumsey suggests limiting your vino intake to one glass a day for women and two for men.

"Grapes can be incorporated into the diet as an afternoon or bedtime healthy snack, a crunchy salad topping, or tasty addition to a morning smoothie," said Rumsey. "They are a very versatile fruit and can be added to most dishes for a healthy burst of flavor." She added that one serving is about 32 seedless grapes (one cup).