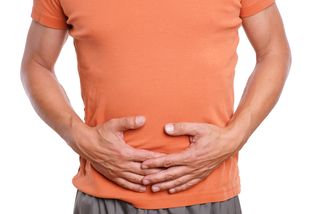 Diverticulitis can cause severe and sudden abdominal pain.
(Image: © bilderpool/Shutterstock.com)

Diverticulitis is a condition that affects the digestive system. It can cause problems with bowel movements and a can cause severe and sudden pain in the abdomen.

It's important to make a distinction between diverticulosis and diverticulitis. Diverticulosis is the simple presence of diverticula, which are small bulges or pouches that can form anywhere within the digestive system, such as in the intestines, esophagus and stomach. They are most commonly formed in the lower colon. One pouch is called a diverticulum and multiple pouches are called diverticula.

Diverticula usually develop in response to pressure on weak spots in the colon or other parts of the digestive tract. These are very common, and the vast majority of people who have them will not have a problem with them. They become more common as people age.

Ten to 25 percent of people with diverticulosis get diverticulitis and as many as one American in 10 over the age of 40 has diverticulosis. Altogether, about half of people over age 60 have diverticulosis, according to the U.S. National Library of Medicine.

It was once thought that a low-fiber diet may contribute to inflammation, but a high-fiber diet and increased frequency of bowel movements are associated with greater prevalence of diverticulosis, according to a 2012 study published by the journal Gastroenterology.

Doctors aren't sure, though, why these pouches get inflamed or infected. According to one theory, decreased levels of serotonin in the body may cause decreased relaxation and increased spasms of the colon muscle. Infection could also result when fecal matter gets trapped inside openings in the diverticula. Various types of obstruction can also block the pouches' openings. This would reduce blood supply, causing inflammation. Other research suggests that obesity, smoking and certain medications may cause inflammation.

The most obvious symptom of diverticulitis is usually a sharp pain in the left side of the abdomen. This may also occur on the right, especially in people of Asian descent, according to the Mayo Clinic.

Diverticulitis comes with a number of other symptoms, including fever, abdominal tenderness constipation, diarrhea, nausea, vomiting and a change in bowel movement frequency.

While many cases of diverticulitis are easy to treat and do not pose a major health risk, some can be more severe. An abdominal infection such as diverticulitis is a common cause of sepsis, said Dr. Niket Sonpal, an assistant professor of clinical medicine at Touro College of Osteopathic Medicine, Harlem Campus. Severe diverticulitis may also cause bowel obstruction.

Severe cases of diverticulitis may require hospitalization. There, doctors may prescribe intravenous antibiotics or even perform surgery to remove the infected portion of the intestines.

Often those with uncomplicated diverticular disease is prescribed antibiotics, though a 2017 paper published the U.S. National Library of Medicine shows that they may not be warranted. For mild cases of diverticulitis, people usually only need to change what they eat and possibly take antibiotics for the diverticulum infection. Their medical professional may also suggest over-the-counter pain killers. For people with uncomplicated diverticulitis, this treatment is successful 70 to 100 percent of the time, according to the Mayo Clinic.

"If a patient has diverticulitis and is being treated as an outpatient (at home) most doctors recommend a clear liquid diet until improvement in symptoms is seen," said Johal. "If patients are in the hospital, doctors may recommend nothing to eat initially and then start a clear liquid diet once the patient shows improvement." When the patient is significantly better, more solid foods are added into the diet.

Once healing has begun, patients are often encouraged to eat foods high in fiber. "Historically we'd have told all such patients to avoid seeds, nuts, popcorn, that could conceivably get trapped and worsen or cause infection," said Dr. Neil H. Stollman, a gastroenterologist based in Oakland, Calif. "Good science now suggests that that's not true, and that there's no strong evidence that patients should avoid such things.

"Further," said Stollman, "there's quite good data that patients who consume a high fiber diet have fewer complications of their diverticulitis, and it's reasonable to advocate a high fiber diet for such patients (other than during their immediate infection period, for a week or two, where we might advocate a temporary low fiber bland diet until the acute event resolves."

A 2016 paper published by the U.S. National Library of Medicine stated that consuming fiber, non-absorbable antibiotics and probiotics seems to be effective in treating symptomatic and uncomplicated patients. A study published in the August 27, 2008, issue of JAMA backs up the notion that eating nuts, corn and popcorn does not increase the risk of diverticulitis or diverticular bleeding.

Staying away from red meat may also help. A 26-year study, published Jan. 9, 2017, in the journal Gut, found that out of the 46,000 men analyzed, those who ate six or more servings of red meat weekly were 58 percent more likely to develop diverticulitis. [Related: Sorry, Steak Lovers: Red Meat Linked to Gut Condition]

What if diverticulitis goes untreated? "An interesting question, and one that historically, we would have answered with: 'catastrophe,' including potential perforation, abscess in the abdomen, sepsis and even death. Thus, the imperative to treat essentially all patients with antibiotics," said Stollman.

However, two large studies, one by the Centre for Clinical Research at Uppsala University and the other by the University of Amsterdam, had control groups with no treatment. Despite concerns, no real catastrophe occurred in the control (no antibiotics) patients, or at least not at any higher a rate than those who did get antibiotics. "That's forcing us to rethink our conception that antibiotics are OBLIGATE or 'badness' will ensue. It seems that for some patients, at least those with milder disease, they'll get better with or without treatment," said Stollman.

From 15 to 30 percent of patients will experience recurrence of diverticulitis after their initial cure, according to American Gastroenterological Association Institute.