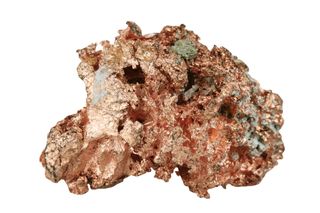 Shiny, reddish copper was the first metal manipulated by humans, and it remains an important metal in industry today.

The oldest metal object found in the Middle East consists of copper; it was a tiny awl dating back as far as 5100 B.C. And the U.S. penny was originally made of pure copper (although, nowadays, it is 97.5 percent zinc with a thin copper skin).

Copper ranks as the third-most-consumed industrial metal in the world, after iron and aluminum, according to the U.S. Geological Survey (USGS). About three-quarters of that copper goes to make electrical wires, telecommunication cables and electronics.

Aside from gold, copper is the only metal on the periodic table whose coloring isn't naturally silver or gray.

Most copper occurs in ores and must be smelted, or extracted from its ore, for purity before it can be used. But natural chemical reactions can sometimes release native copper, according to the chemistry database site, Chemicool.

Humans have been making things from copper for at least 8,000 years and figured out how to smelt the metal by about 4500 B.C. The next technological leap was creating copper alloys by adding tin to copper, which created a harder metal than its individual parts: bronze. The technological development ushered in the Bronze Age, a period covering approximately 3300 to 1200 B.C, and isdistinguished by the use of bronze tools and weapons, according to History.

Copper artifacts are sprinkled throughout the historical record. Archaeologists discovered a tiny awl, or pointed tool, dating to 5100 B.C., that was buried with a middle-age woman in an ancient village in Israel. The awl represents the oldest metal object ever found in the Middle East. The copper probably came from the Caucasus region, located in the mountainous region covering southeastern Russia, Armenia, Azerbaijan, and Georgia more than 600 miles (1,000 kilometers) away, according to 2014 article published in PLOS ONE. In ancient Egypt, people used copper alloys to make jewelry, including toe rings. Researchers have also found massive copper mines from the 10th century B.C. in Israel.

About two-thirds of the copper on Earth is found in igneous (volcanic) rocks, and about one-quarter occurs in sedimentary rocks, according to the USGS. The metal is ductile and malleable, and conducts heat and electricity well — reasons why copper is widely used in electronics and wiring.

Copper turns green because of an oxidation reaction; that is, it loses electrons when it's exposed to water and air. The resulting copper oxide is a dull green. This oxidation reaction is the reason the copper-plated Statue of Liberty is green rather than orange-red. According to the Copper Development Association, a weathered layer of copper oxide only 0.005 inches (0.127 millimeters) thick coats Lady Liberty, and the covering weighs about 80 tons (73 metric tons). The change from copper-colored to green occurred gradually and was complete by 1920, 34 years after the statue was dedicated and unveiled, according to the New York Historical Society.

Here are some interesting facts about copper:

Medicine: Copper's anti-microbial properties have made it a popular metal in the medical field. Multiple hospitals have experimented with covering frequently touched surfaces, such as bed rails and call buttons, with copper or copper alloys in an attempt to slow the spread of hospital-acquired infections. Copper kills microbes by interfering with the electrical charge of the organisms' cell membranes, said Cassandra Salgado, a professor of infectious diseases and a hospital epidemiologist at the Medical University of South Carolina.

In 2013, a team of researchers led by Salgado tested surfaces in intensive-care units (ICUs) in three hospitals, comparing rooms modified with copper surfaces attached to six common objects that are subjected to many hands to rooms not modified with copper.  The scientists found that, in the traditional hospital rooms (those without copper surfaces), 12.3 percent of patients developed antibiotic-resistant infections such as methicillin-resistant Staphylococcus aureus (MRSA) and vancomycin-resistant Enterococcus (VRE). By comparison, in the copper-modified rooms, only 7.1 percent of patients contracted one of these potentially devastating infections.

"We know that if you put copper in a patient's room, you're going to decrease the microbial burden," Salgado told Live Science. "I think that's something that has been shown time and time again. Our study was the first to demonstrate that there could be a clinical benefit to this."

The researchers changed nothing else about the ICU conditions beyond the copper; doctors and nurses still washed their hands, and cleaning went on as usual. The researchers published their findings in 2013 in the journal Infection Control and Hospital Epidemiology.

Salgado and her team have also tested copper lining on stethoscopes, according to a 2017 article published in the American Journal of Infection Control, where the researchers found that there were significantly fewer bacteria on copper-coated stethoscopes and 66 percent of the stethoscopes were entirely free of bacteria. Further research is continuing to test the idea of copper plating in other medical wards, particularly in areas where patients are more mobile than in the ICU. There also needs to be a cost-benefit analysis weighing the expense of copper installation against the savings gained by preventing costly infections, she said.

Electronics: Copper also plays a huge role in electronics, and because of its abundance and low price, researchers are working to integrate the metal into an increasing number of cutting-edge devices.

In fact, copper may help produce futuristic electronic paper, wearable biosensors and other "soft" electronics, said Wenlong Cheng, a professor of chemical engineering at Monash University in Australia. Cheng and his colleagues have used copper nanowires to create an "aerogel monolith," a material that is highly porous, very light and strong enough to stand up on its own, similar to a dry kitchen sponge. In the past, these aerogel monoliths have been made from gold or silver, but copper is a more economical option.

By mixing copper nanowires with small amounts of polyvinyl alcohol, the researchers created aerogel monoliths that could turn into a sort of sliceable, shapable rubber that conducts electricity. The researchers reported their findings in 2014 in the journal ACS Nano. The ultimate result could be a soft-bodied robot, or a medical sensor that melds perfectly to curved skin, Cheng told Live Science. He and his team are currently working to create blood pressure and body temperature sensors out of copper aerogel monoliths — another way copper could help monitor human health.

Physics: In a 2014 experiment, a chunk of copper became the coldest cubic meter (35.3 cubic feet) on Earth when researchers chilled it to 6 millikelvins, or six-thousandths of a degree above absolute zero (0 kelvin). This is the closest a substance of this mass and volume has ever come to absolute zero.

Researchers at the Italian National Institute for Nuclear Physics put the 880-lb. (400 kilograms) copper cube inside a container called a cryostat that is specially designed to keep items extremely cold. This is the first cryostat, or device for keeping things at low temperatures, that is capable of keeping substances so close to absolute zero.

Building the extreme temperature cryostat is just the first step in a new experiment in which the cryostat will act as a particle detector. Researchers hope the detector, which is in the process of being commissioned according to a 2018 status update, will reveal more about the subatomic particles called neutrinos and why there is so much more matter than antimatter in the universe.

The researchers have been studying how plants absorb and process the copper. They have found two proteins within the wheat, AtCITF1 and AtSPL7, that are vital to the uptake and delivery of the copper to the wheat's reproductive organs, according to the U.S. Department of Agriculture.

Early tests have shown that when copper and other nutrients are enriched in the soiland then absorbed by the wheat, crop yields increase by as much as seven times. While the knowledge of copper and other minerals are known to be beneficial for the health and fertility of crops, the how and why of the fact is not well understood. The knowledge of why copper is beneficial and how it functions within a plant’s growth and reproduction can further be used on crops such as rice, barley and oats, and can introduce these crops with a mineral-rich fertilizer, which includes copper, to soil that was once unsuitable for farming.

This article was updated on Sept. 12, 2018, by Live Science contributor Rachel Ross.