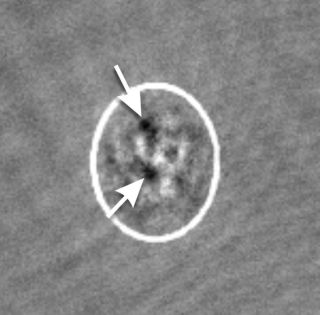 The vortices are made more visible in this image by subtracting off everything but the vortices. These vortices are responsible for stopping the motion of the atoms.
(Image: © Brian DeMarco, University of Illinois)

These temperatures are incredibly hot compared to the atom gases I work with as a graduate student in Professor Brian DeMarco's lab at the University of Illinois. We do experiments with atom gases cooled to only 10 billionths of a degree above absolute zero (-459.67 °F).

Atoms at room temperature move at about 500 feet per second, but after we cool them they move at mere tenths of an inch a second, about 10 times slower than the top speed of a common garden snail. How do we accomplish this feat?

The key is a combination of laser and evaporative cooling. Refrigeration using lasers might seem odd, since lasers can be used to cut and mark stainless steel, like the back of an iPod. The laser light in our experiment, which consists of billions of billions of tiny packets of energy called photons that fly past the atoms each second, is special because it only scatters off the atoms moving towards the laser light, causing them to slow down. You can imagine this process as similar to slowing down a car using a stream of many tennis balls traveling in the opposite direction.

Laser cooling is limited to refrigerating the atom gas to temperatures near a millionth of a degree above absolute zero. So, just like your body sweats to regulate its temperature, we use evaporative cooling to reach the lowest temperature possible in our experiment.

After laser cooling, we turn off all of the light and the atoms are trapped using magnets. We force the highest energy atoms to leave, and the atoms left behind become colder. We don't need to worry about getting frostbite since all of this happens inside an insulating vacuum container.

We cool these atoms to such low temperatures so that their behavior is dominated by quantum effects.

Quantum mechanics may seem exotic, but it affects every aspect of your life, from the chemical basis of your metabolism, to the forces that prevent your feet from falling through the floor. The quantum behavior of many particles together is the foundation for much of modern technology. For example, materials like the semiconductors inside computer chips, which consist of electrons traveling through crystals formed by ions, use the quantum behavior of those electrons to make transistors. Some quantum effects in materials are not well understood, such as what happens inside "high-temperature" superconductors that can operate at temperatures higher than the boiling point of nitrogen. In a superconductor, the resistance to flow of electrons through the material vanishes below a certain temperature.

Superconductors, already common in MRI machines in hospitals throughout the country, could be used for much more (such as saving energy in transmitting electricity from a power station to your house) if they would operate at even higher temperatures. Physicists don't know how to accomplish this, because we don’t understand much about how high-temperature superconductors work.

We can't even use our most powerful supercomputers to simulate these materials—right now we can only calculate the behavior of about 10 electrons, compared to the millions of billions of billions of electrons in a superconducting wire. Every 10 years, advancements in the speed of computers let us add only one electron to a computer simulation. We're trying to shed light on these materials in our lab using a very different approach called quantum simulation.

We have built a system which replaces the electrons with ultra-cold atoms and the ionic crystal with a crystal of light. The result is what we call a quantum simulator, because we have replaced the system we wish to understand with something we can easily measure and manipulate. Actual materials require sensitive probes to look at the electrons and special and time-consuming techniques to change the material properties. With our simulator we can directly image the atoms and change the nature of the "material" just by changing knobs in the lab.

The idea of using one quantum system to simulate another was first imagined by Richard Feynman in 1981, a physicist awarded the Nobel Prize in 1965, and who assisted in understanding how O-ring failure led to the Challenger disaster in 1986.

What grad students do

Being a graduate student on a project like this entails many responsibilities. First, we had to build our simulator, which is one of the most complex experiments that can be done in a lab about the size of a large bedroom. The equipment is spread over two steel tables that weigh 1000 pounds each and are floated by air pistons to reduce vibrations. The experiment uses more than 10 different lasers and hundreds of mirrors and lenses. We have shelves of electronic components and several computers to run the whole thing. Fortunately, we only had to set everything up once.

My role as a graduate student primarily involves running the experiment and making measurements.

Sometimes we run the experiment with a certain result in mind. However, like all science, usually a bit of luck is involved. Every once in a while we get a result that we cannot understand at first. These are the most exciting because they add to our knowledge by challenging what we already know.

Our recent discovery involved a set of experiments looking at the atoms moving through the crystal of light. We discovered that quantum vortices (similar to the whirlpools in your bathtub) play a role in slowing down the atoms. To understand this result we had to talk with researchers at Illinois who work with superconducting wires and sheets. They told us that vortices had been observed to interrupt the flow of electrons in tiny superconducting wires, but that process is not completely understood, so our measurements may help to better understand these materials. As a graduate student this was a good opportunity to observe how different areas of physics can work together and understand that discovery is rarely the result of an individual working in isolation.

Right now we are trying to invent other ways that we can simulate materials. For example, we are working on adding disorder to our crystal of light to understand how impurities in materials affect superconductivity. We can't wait to find out what new science we will discover next!