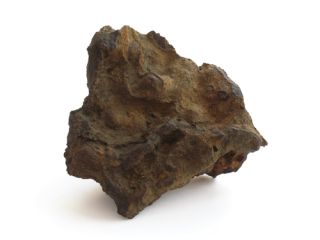 Iron ore oxidizes, or rusts, when it comes in contact with oxygen.
(Image: © Denis Selivanov | Shutterstock)

From being a crucial building block of steel to nourishing plants and helping carry oxygen in your blood — iron is always busy helping sustain life on Earth.

Iron is a brittle, hard substance, classified as a metal in Group 8 on the Periodic Table of the Elements. The most abundant of all metals, its pure form rapidly corrodes from exposure to moist air and high temperatures. Iron is also the fourth most common element in Earth's crust by weight and much of Earth's core is thought to be composed of iron. Besides being commonly found on Earth, it is abundant in the sun and stars, according to the Los Alamos National Laboratory. Iron is crucial to the survival of living organisms, according to Jefferson Lab. In plants, it plays a role in the production of chlorophyll. In animals, it is a component of hemoglobin — a protein in blood that carries oxygen from the lungs to the tissues in the body.

Ninety percent of all metal that is refined these days is iron, according to the Royal Society of Chemistry. Most of it is used to make steel — an alloy of iron and carbon — which is in turn used in manufacturing and civil engineering, for instance, to make reinforced concrete. Stainless steel, which contains at least 10.5 percent chromium, is highly resistant to corrosion. It is used in kitchen cutlery, appliances and cookware such as stainless steel pans and skillets. The addition of other elements can provide steel with other useful qualities. For instance, nickel increases its durability and makes it more resistant to heat and acids; manganese makes it more durable, whereas tungsten helps it maintain hardness at high temperatures, according to Jefferson Lab.

History and properties of iron

Archeologists estimate that people have been using iron for more than 5,000 years, according to Jefferson Lab. In fact, it turns out that some of the most ancient iron known to humans literally fell from the sky. In a study published in 2013 in the Journal of Archeological Science, researchers examined ancient Egyptian iron beads that date to around 3200 B.C. and found that they were made from iron meteorites. The Old Testament in the Bible also mentions iron multiple times, according to Los Alamos National Laboratory.

Iron is mostly obtained from minerals hematite and magnetite. In smaller degrees, it can also be obtained from the minerals taconite, limonite and siderite, according to Jefferson Lab. Iron has four different allotropic forms, which means that it has four different structural forms in which atoms bond in different patterns, according to Los Alamos National Laboratory. Those forms are called ferrites, known as alpha (which is magnetic), beta, gamma and omega.

Iron is an important nutrient in our diet. Iron deficiency, the most common nutritional deficiency, can cause anemia and fatigue that affects the ability to perform physical work in adults. It can also impair memory and other mental function in teens, according to the Centers for Disease Control and Prevention. Women who have iron deficiency while pregnant are at an increased risk of having small and early babies, the CDC warns.

Iron has been the subject of numerous medical studies, some of which show that high levels of iron in the blood may in fact be linked to an increased risk of cardiovascular problems. "There is some research suggesting that people who have more ferritin in their blood system and markers of higher iron in the body may be more at risk in terms of some cardiovascular diseases," said Judith Wylie-Rosett, a professor at the department of epidemiology and population health and the department of medicine at Albert Einstein College of Medicine of Yeshiva University in New York. "And whether that's causing the risk or that's a biomarker for something else going on is unclear," Wylie-Rosett told Live Science. (Ferritin is a type of protein that stores iron, while the ferritin test measures the amount of iron in your blood.)

In a study of more than 1,900 Finnish men ages 42 to 60 years, published in 1992 published in the journal Circulation, researchers found a link between high levels of iron and increased risk of heart attack. In a more recent study, published online in January 2014 in the Journal of Nutrition, researchers found that heme iron, found in meat, increased the risk for coronary heart disease by 57 percent, but no such association was found between non-heme iron and coronary heart disease risk.

Interestingly, recent research has also linked the accumulation of iron in the brain to Alzheimer's disease. In a study published in August 2013 in the Journal of Alzheimer's Disease, researchers found that the amount of iron in the hippocampus — an area of the brain associated with the formation of memories — was increased and associated with tissue damage in the hippocampus area in people with Alzheimer's disease, but not in healthy older people.

"The accumulation of iron in the brain may be influenced by modifying environmental factors, such as how much red meat and iron dietary supplements we consume and, in women, having hysterectomies before menopause," study author Dr. George Bartzokis, a professor of psychiatry at the Semel Institute for Neuroscience and Human Behavior at UCLA, said in a statement.

Iron deficiencies have also been linked with depression, according to a 2017 study published in the Journal of Psychiatric Research by a group of Australian researchers who were trying to find a link between genetics, iron levels and depression, especially with teenagers. The researchers found that although there is a link between iron levels in the bloodstream and measure of depression, there is no evidence for a genetic relationship between the two. The researchers used data available from twin studies and looked at a variety of factors while comparing teenaged twins to adult twins. The link between iron levels and depression is most likely to be observed during periods of time when the body requires higher amounts of iron such as during growth spurts.

A 2017 article published in the European Journal of Nutrition by a research group from Iran described a study in which iron supplements were given to new, non-anemic mothers with postpartum depression (PPD). A group of 70 women began the double-blind trial one week after giving birth and PPD symptoms were compared six weeks later. The group taking the iron supplement experienced a significantly greater improvement of PPD symptoms than the group taking the placebo.