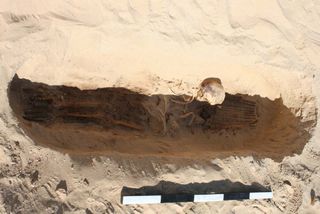 The male ancient Egyptian skeleton lived more than 3,300 years ago and died at the age of 35-40, before being buried with a ring on his right toe.
(Image: © Photo courtesy the Amarna Project)

Archaeologists have discovered two ancient Egyptian skeletons, dating back more than 3,300 years, which were each buried with a toe ring made of copper alloy, the first time such rings have been found in ancient Egypt.

The toe rings were likely worn while the individuals were still alive, and the discovery leaves open the question of whether they were worn for fashion or magical reasons.

Supporting the magical interpretation, one of the rings was found on the right toe of a male, age 35-40, whose foot had suffered a fracture along with a broken femur above it. [See Images of Skeletons & Toe Rings]

Both skeletons were found in a cemetery just south of the ancient city of Akhetaten, whose name means "Horizon of the Aten." Now called Amarna, the city of Akhetaten was a short-lived Egyptian capital built by Akhenaten a pharaoh who tried to focus Egypt's religion around the worship of the sun disc, the "Aten." He was also likely the father of Tutankhamun.

After Akhenaten's death, this attempt to change Egyptian religion unraveled, as his successors denounced him and the city became abandoned. Even so, Anna Stevens, the assistant director of the Amarna Project, said the newly discovered rings are unlikely to be related to the religious changes Akhenaten introduced.

The findings do appear to be the first copper alloy toe rings discovered in ancient Egypt. "I'm not aware of any, but that doesn't mean they don't exist. Bear in mind that if we found something like this in a house, for example, we would have no idea of its purpose,"Stevens wrote in an email toLiveScience.

A gold toe ring was previously found on a mummy named Hornedjitef, a priest at Karnak more than 2,200 years ago. The mummy, which resides at the British Museum, has a "thick gold ring on the big toe of his left foot," writes anthropologist Joyce Filer in her book "The Mystery of the Egyptian Mummy" (British Museum Press, 2003). [Images: The Faces of Egyptian Mummies Revealed]

The man whose right foot had been injured was likely in great pain when alive.

He "showed signs of multiple antemortem [before his death] fractures, including of several ribs, the left radius, right ulna, right foot (on which the toe ring was found) and right femur," Stevens wrote. "The fracture of the right femur healed at an angle and must have caused this individual considerable ongoing pain."

The ring was placed on the toe of the injured foot, suggesting perhaps it was intended as a magical healing device of sorts.

"The act of 'binding' or 'encircling' was a powerful magical device in ancient Egypt, and a metal ring, which can be looped around something, lends itself well to this kind of action," Stevens said. "This is a possibility that we will look into further, checking through sources such as the corpus of magico-medical spells that have survived from ancient Egypt, to look for parallels."

However, the skeleton of the second individual with the toe ring, found in 2012, bore no visible signs of a medical condition. Stevens notes that this individual has yet to be studied in depth by bio-archaeologists and its sex is unknown.

The skeletons were wrapped in textile and plant-stem matting, and both burials had been disturbed by tomb robbers.

None of the skeletons in the cemetery were technically "mummified" so to speak. "There is no evidence from the cemetery as a whole of attempts to mummify the bodies, in terms of the removal of internal organs (we quite often find remains of brain within the skulls) or the introduction of additives to preserve tissue (the bodies survive largely as skeletons)," Stevens wrote. "But in a way the wrapping of the bodies within textile and matting is a step towards preserving the shape of the body, and a form of simple mummification." [In Photos: Mummy Evisceration Techniques]

Figuring out who these individuals were in life is tricky, Stevens said. This cemetery appears to represent a "wide slice" of the city's society. These people were not wealthy enough to get buried in a rock-cut tomb but could afford, and were allowed, the simple burials seen at this cemetery.

"They [the two individuals] probably lived, like most citizens of Amarna, in a small house adjacent to that of a larger villa belonging to one of the city's officials, for whom they provided services and labor in exchange for basic provisions, especially grain," Stevens said.

In the case of the male with multiple fractures, his life appears to have been especially difficult and he also has signs of degenerative joint disease. It "suggests a life [of] labor was more likely for this individual than, say, an existence as a scribe," Stevens said. In both cases, however, the individuals' lives ended with each having a copper alloy ring on one of their toes.

The case of the male individual with the toe ring was published in the most recent edition of the Journal of Egyptian Archaeology. More information on the Amarna Project can be found at www.amarnaproject.com.