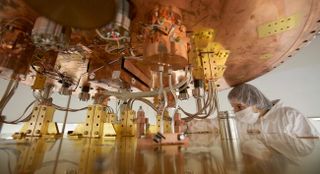 Scientists cooled a copper cube inside a cryostat, the first such container built that can keep substances so close to absolute zero.
(Image: © Instituto Nazionale di Fisica Nucleare (INFN) )

A chunk of copper became the coldest cubic meter (35.3 cubic feet) on Earth when researchers chilled it to 6 millikelvins, or six-thousandths of a degree above absolute zero (0 Kelvin).

This is the closest a substance of this mass and volume has ever come to absolute zero. Researchers put the 880-lb. (400 kilograms) copper cube inside a container called a cryostat that is specially designed to keep items extremely cold. This is the first cryostat built that is capable of keeping substances so close to absolute zero.

"The main difficulty of this project was the technological challenge of the cryostat," Carlo Bucci, a researcher at the Instituto Nazionale di Fisica Nucleare (INFN) in Italy who helped build the cryostat, told Live Science. "We spent 10 years designing, realizing and testing the system." [The 8 Coldest Places on Earth]

Building the extreme temperature cryostat is just the first step in a new experiment in which the cryostat will act as a particle detector. The setup for the experiment is called Cryogenic Underground Observatory for Rare Events (CUORE) and is being built at the INFN Gran Sasso underground lab. Bucci and a team of researchers hope the CUORE detector will reveal more about the subatomic particles called neutrinos and why there is so much more matter than antimatter in the universe.

Antimatter is made of particles with the exact opposite charge of those that constitute regular matter. Just after the Big Bang that created the universe some 13.7 billion years ago, matter and antimatter are thought to have existed in equal amounts. But when these two substances collide, they annihilate each other, which means the universe shouldn't exist. But for some reason, matter came to dominate antimatter, and physicists are still unsure why.

Bucci and his colleagues hope to observe a rare phenomenon called neutrinoless double-beta decay. This happens when antineutrinos decay into regular neutrinos. The researchers hope to prove that neutrinos are Majorana particles, meaning they act as their own antiparticles. Physicists think the phenomenon could explain why the universe contains so much more matter than antimatter. The experiment could also reveal the exact mass of neutrinos, something that physicists have been trying to calculate for years.

But temperatures need to stay around 10 millikelvins to give the researchers any shot at observing the rare event. That's where the CUORE detector comes in. Once it is finished, the inside of the cryostat will be lined with hundreds of crystals that can detect neutrinos by picking up radiation and temperature changes. The cryostat is cooled using a high-power dilution refrigerator (named so because of the chemical process that provides the cooling), but uses a series of tubes that involve pressure and gas instead of liquid nitrogen or liquid helium.

Bucci said the team could not use liquid nitrogen or liquid helium, because those materials are expensive and could produce vibrations during the experiment. These could prevent the detector from picking up the neutrinos.

Almost 2 tons (1.8 metric tons) of lead will cover the cryostat, to prevent any radiation from getting inside and interfering with the detection of the neutrinos.

Bucci and the team hope to have the experiment up and running within the next year.