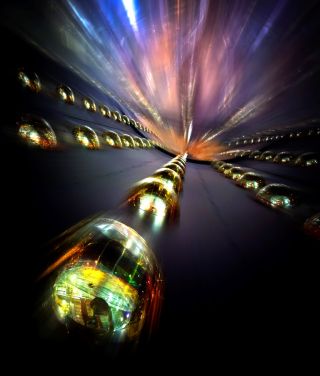 The Daya Bay Neutrino Experiment is designed to provide new understanding of neutrino oscillations that can help answer some of the most mysterious questions about the universe. Shown here are the photomultiplier tubes in the Daya Bay detectors.
(Image: © Roy Kaltschmidt, Berkeley Lab)

Strange particles called neutrinos have a habit of switching identities, changing from one flavor into another — a transformation that may help probe some of the fundamental mysteries of the universe.

Now researchers conducting an underground particle detector experiment in China have published their latest measurements of this shape-shifting, which is called neutrino oscillation, and report the most precise values known for certain parameters describing how it occurs.

Neutrinos come in three flavors — electron, muon and tau — which each exist as a mixture of three possible neutrino masses (though the actual value of these masses is currently unknown). Neutrinos may start as one flavor, say electron neutrinos, and then switch into muon or tau neutrinos as they travel through space. [Wacky Physics: The Coolest Little Particles in Nature]

Powerful nuclear reactors at the China Guangdong Nuclear Power Group in southeastern China create millions of quadrillions of electron antineutrinos every second (antineutrinos are the antimatter counterparts to neutrinos, and act, for the purposes of the experiment, the same as their normal matter cousins). Most of these particles fly through matter at almost the speed of light without colliding with the particles in regular atoms. A small proportion of them, however, will impact the atoms in the detectors of the Daya Bay Reactor Neutrino Experiment, allowing researchers to count them.

By comparing how many electron antineutrinos arrive at each of six detectors, all buried underground at different distances from the reactors, physicists can calculate how many "disappear." When these particles seem to have vanished, they've actually oscillated into another flavor, scientists conclude.

The new Daya Bay neutrino oscillation data allowed the researchers to measure the probability of the electron neutrino occupying each possible mass state — a term known as the neutrino "mixing angle." The first release of Daya Bay data in March 2012 published the first known value of the mixing angle called theta one-three, or θ13. The new calculation is even more precise.

"We've obtained the most precise measurement of this neutrino mixing angle in the world," said Kam-Biu Luk, co-spokesperson of the Daya Bay collaboration at the University of California, Berkeley. "This is an update. The Daya Bay result has been the best in the world. This makes it even better."

"This is a first step towards an approach in resolving the mass hierarchy problem — that is the ordering of the neutrino masses," Luk told LiveScience. "We do not know the origin of the neutrino masses; however, if we can measure the mass splitting more precisely, then along with other experiments, we should be able to tell whether the third mass is heavier than the other two, or the other way around. This is important because at this moment we have no idea."

Ultimately, scientists hope to find out the value of each neutrino mass state. "At this moment we have no idea how heavy each neutrino is," Luk said.

Studying neutrino oscillations can also help shed light on some of the larger mysteries facing physicists, such as the nature of antimatter and the question of why the universe isn't made of antimatter.

"These new precision measurements are a great indication that our efforts will pay off with a deeper understanding of the structure of matter and the evolution of the universe — including why we have a universe made of matter at all," Steve Kettell, a senior scientist at Brookhaven National Laboratory on Long Island, N.Y., and the U.S. Daya Bay chief scientist, said in a statement.

The Daya Bay researchers are presenting their findings this week at the XVth International Workshop on Neutrino Factories, Super Beams and Beta Beams (NuFact2013) in Beijing.