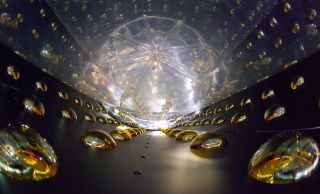 The inside of a cylindrical antineutrino detector before being filled with clear liquid scintillator, which reveals antineutrino interactions by the very faint flashes of light they emit. Sensitive photomultiplier tubes line the detector walls, ready to amplify and record the telltale flashes.
(Image: © Roy Kaltschmidt photo, LBNL)

Scientists have caught a rare type of exotic particle in the act of disappearing, and the vanishing trick appears to be more common than expected.

For the first time, researchers have observed particles called electron antineutrinos turning into other types of particles, and calculated the frequency at which this happens. Though the phenomenon is extremely rare, it turns out that it's slightly less rare than once thought.

Electron antineutrinos are odd in a number of ways. For one thing, they're a kind of antimatter — the strange cousin of matter with the inconvenient habit of annihilating matter on contact.

But even regular neutrinos are a little befuddling. Neutrinos come in three types, or flavors: electron, muon and tau. For each of these, there is an antimatter partner particle (the electron antineutrino, the muon antineutrino and the tau antineutrino) with equal mass but opposite charge.

For years, all neutrinos were thought to weigh nothing at all, but recently scientists discovered they do have some mass, though it's less than one-millionth that of an electron. This mass, in fact, enables an especially bizarre habit neutrinos have of changing from one type to another, a phenomenon called neutrino oscillations. [Wacky Physics: The Coolest Little Particles in Nature]

The new findings come from the Daya Bay Reactor Neutrino Experiment, which tracked electron antineutrinos created by the nuclear reactors of the China Guangdong Nuclear Power Group in southeastern China.

These reactors produce millions of quadrillions of electron antineutrinos every second, which generally pass through regular matter, including the reactor walls and adjacent mountains, without interacting or colliding at all. However, six specially created neutrino detectors buried in the mountains at various distances were able to catch some of these particles before they could get away.

The researchers counted how many electron antineutrinos were captured at farther distances compared with closer detectors to determine how many of them had disappeared by transforming into other types of antineutrinos. The observations allowed the researchers to calculate a long-sought term (theta one-three, or θ13) in the equations that describe these neutrino oscillations.

Theta one-three is what's called a mixing angle, and is one of three that describe the various transformations between the three types of neutrinos and antineutrinos. The other two mixing angles had previously been calculated, so the new discovery helps fill in a missing piece of the neutrino puzzle.

"This is a new type of neutrino oscillation, and it is surprisingly large," Yifang Wang of China's Institute of High Energy Physics, the co-spokesperson and Chinese project manager of the Daya Bay experiment, said in a statement. "Our precise measurement will complete the understanding of the neutrino oscillation and pave the way for the future understanding of matter-antimatter asymmetry in the universe."

The finding offers the hope of helping answer one of the universe's most baffling questions: Why is everything made of matter, and not antimatter?

A universe of matter

Scientists think the universe started out with equal types of matter and antimatter, but they destroyed each other. For some reason, a small amount of matter survived to become the galaxies, stars and planets we find today.

One of scientists' best guesses about why matter prevailed in this tug-of-war is that it behaves differently and decays more slowly than antimatter. To explain why that might be the case, physicists are studying rare particle events — such as neutrino oscillations — in search of any differences in the rates of these between matter and antimatter.

"The result is very exciting, because it essentially allows us to compare neutrino and antineutrino oscillations in the future and see how different they are and hopefully have an answer to the question, 'Why do we exist?'" said the experiment's co-spokesperson Kam-Biu Luk, a professor of physics at the University of California, Berkeley, and a faculty scientist at Lawrence Berkeley National Laboratory.

The new findings are reported in a paper submitted to the journal Physical Review Letters.