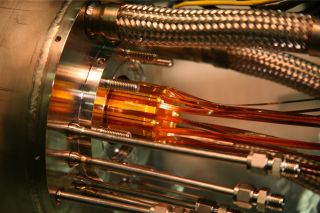 This antimatter trap at the ALPHA experiment at CERN mixes positrons and antiprotons to make antihydrogen.
(Image: © Niels Madsen ALPHA/Swansea)

Scientists have taken the first-ever measurement of an atom made of antimatter.

This measurement, though not very precise, represents a first step toward being able to study antimatter atoms in detail — a goal necessary for understanding why the universe is made of matter and not antimatter, its mysterious sibling.

All particles of matter are thought to have antimatter partners with the same mass but opposite charge. When these pairs meet, they annihilate each other to become pure energy.

Why matter won this cosmic duel is a mystery.

In a previous study, physicists at Switzerland's CERN laboratory succeeded in trapping antihydrogen atoms for several minutes by using magnetic fields to keep them suspended in one spot.

An antihydrogen atom is the analog of hydrogen, the simplest atom among the elements. Where hydrogen contains one proton and one electron, antihydrogen is made up of one antiproton and one positron (the antimatter partner of the electron). [Wacky Physics: The Coolest Little Particles in Nature]

In the new research, physicists found they could beam microwave light of a specific frequency at an antihydrogen atom, flipping its spin. This causes the particle's magnetic orientation to change, and the magnetic trap that held it no longer works. The antiatom is free to fly off and hit the walls of its trap, which are made of matter. When it collides with an atom in the wall, the antiatom is annihilated along with the atom, creating a signature that the physicists are able to detect.

"We have made a measurement," said Jeffrey Hangst of Denmark's Aarhus University, spokesman for the CERN laboratory's ALPHA experiment. "Precision-wise, it doesn't compete with matter, but it's the only one that's ever been done on antimatter."

The experiment proves it's possible to change an antiatom's internal properties by shining a light on it. This is the first step toward applying a detailed method of measurement called spectroscopy, which involves tuning the light to a very specific frequency so that it can excite the antiatom's positron to a higher energy level, or orbit. After the excited positron jumps to a higher orbit, it will fall back and emit the extra energy as light, and scientists will measure the light's frequency.

"We are now in the business of doing antimatter spectroscopy," Hangst told LiveScience. "Now we just push forward to make it more and more accurate."

The best current theory of particle physics is called the Standard Model, and it predicts an identical spectrum from hydrogen and antihydrogen. Scientists must precisely measure the true spectrum of antihydrogen to compare the two and test this theory.

If they find them, they may be closer to solving one of the ultimate cosmic quandaries.

"We know there's something we're missing," Hangst said."We know that we don't understand everything about antimatter because we can't explain what happened to it after the Big Bang."

Physicists' best guess is that the two particles behave slightly differently, for example, by decaying at different rates.

The researchers reported their findings online today (March 7) in the journal Nature.