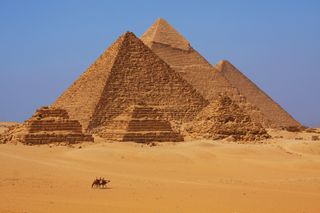 Archaeology is fundamentally the study of humanity and its past. Archaeologists study things that were created, used or changed by humans. They do this by studying the material remains — the stuff we leave behind, such as lithic tools, a simple hut dwelling, a skeleton covered with gold jewelry or a pyramid that majestically rises from a desert floor. Sometimes, archaeologists study contemporary societies in order to shed light on those that flourished in the past.

Archaeology is practiced around the world by archaeologists who work with people from a wide variety of other disciplines to help answer questions about who we are and where we came from. In doing so, archaeologists find evidence that sheds light on what our future may bring.

While archaeologists don’t use bullwhips or revolvers like the fictional Indiana Jones, they use a multitude of technologies and techniques to help solve mysteries of the past. Archaeologist Zahi Hawass, the former Egyptian Minister of Antiquities, said that people sometimes tell him that real-life archaeology, with its careful note-taking and lab work, doesn’t sound as exciting as what Indiana Jones does in the movies. He replies that, on the contrary, “to an archaeologist, yes, it certainly is!”

The term “archaeologist” is an increasingly broad term. While professional archaeologists may all share some general fieldwork and lab skills, they may have developed expertise that allows them to specialize in the study of certain types of artifacts or sites.

Underwater archaeology, textile analysis and the study of plant and animal remains found at archaeological sites are just a few examples. Some may develop language skills that allow them to record and translate texts found at archaeological sites. These language experts may not call themselves archaeologists but instead refer to themselves as epigraphers or another title related to the language that they study. Similarly those who specialize in the study of human remains often call themselves “physical” or “biological” anthropologists, rather than archaeologists.

As new technologies and disciplines appear, the skills that archaeologists develop will continue to grow. Some undergraduate archaeology programs offer only a small number of core archaeology courses and instead encourage students to branch out, taking courses from across many other departments at a university.

Archaeologists also tend to focus their studies on a certain part of the world, or a specific culture, such as Egypt, China or the Maya civilization in Central America. They may also focus on specific timeframes. For instance, an Egyptologist may focus on the Old Kingdom period (2649-2150 B.C.), the time period when the pyramids at Giza were built.

Archaeology deals with animals and plants in only so much as it helps us understand humanity. A dinosaur fossil, for instance, would not be studied by an archaeologist unless that dinosaur was dug up by a human and became part of an archaeological site under investigation (in which case the archaeologist would work with a paleontologist to study it).

In North America and Europe, professional archaeologists tend to have a masters degree or doctorate. This wasn’t always the case. Howard Carter, the archaeologist who led the team that discovered Tutankhamun’s tomb in 1922, had little formal education and learned various archaeological techniques by practice.

A large number of universities offer archaeology programs. The expertise they can convey to their students depends on the faculty and staff members who are available to teach.

Archaeologists can work for a wide variety of employers. These include museums, art galleries, universities, research institutes, government agencies (the National Park Service, for instance), cultural resource management firms (which often work with private companies and governments to survey and excavate sites before development), tourism companies (for instance, acting as highly educated guides) and media companies (helping to make documentaries and aiding in the publication of books, journals and magazines).

Overseas digs will sometimes also offer the chance for people, who are able to pay their own way, to volunteer and help excavate an archaeological site. Sometimes those who volunteer can get course credit at a university in return.

It is hard to give an exact salary range for an archaeologist. In the United States and Canada, a junior field archaeologist (sometimes called a “technician”) who works with a small cultural resource management firm may earn a small amount of money, perhaps not much more than minimum wage.

On the high end, a tenured professor at a major research university may earn a salary that reaches over $100,000. An archaeologist who holds a senior management position at a university, government agency, large cultural resource management firm or large museum may also earn a salary that reaches into six figures. If an archaeologist succeeds in publishing a book that sells well (something that is difficult to do) that may raise their income further. Few, if any, archaeologists say that they went into the discipline for the money.

It does belong in a museum (or at least it should)

Archaeologists today, generally, do not sell the artifacts they dig up. In the past, this was not always the case. Over a century ago, antiquarians (sometimes little more than looters) would excavate artifacts and sell them. In the past, museums, universities, galleries and private individuals would sometimes help pay the cost of a scientific archaeological excavation and, in return, expect a share of the artifacts.

One of the few areas of archaeology where practices like these still, legally, occur is in the salvage of underwater shipwrecks. Some jurisdictions, which don’t have the money to pay for an underwater excavation, will allow a salvage company to excavate a site using professional archaeologists and scientific techniques. The salvage company in turn recoups their costs (and sometimes makes a good profit) by selling some of the artifacts. This practice is deeply controversial among archaeologists and a source of debate among lawmakers.

Another notable exception occurs in part of the United Kingdom where amateurs using metal detectors are allowed to search for artifacts, and at times own their finds, under a complicated system of laws. Again, the use of metal detectors by amateurs is highly controversial with many archaeologists saying that they damage archaeological sites and impede scientific investigations.

How did archaeology get its start?

In some ways, archaeology is an ancient discipline. It was not unusual for ancient societies to keep old material and take steps to preserve sites and monuments they deemed important.

In the early modern period, with the onset of the Enlightenment and subsequent scientific revolution, archaeology gradually became what we would consider “scientific” as methods were developed at recording sites in greater detail and determining the age of artifacts (for instance by studying the sediment in which they were found and analyzing how the style of lithic and ceramic artifacts changed over time).

Where does archaeology go from here?

As technology develops, new methods for studying the past have been incorporated into the discipline. For instance, as high resolution Google Earth imagery became available in the last decade, archaeologists (and amateurs) got to make use of this free (or otherwise very cheap) tool that allowed them to survey large tracts of land in areas that are sometimes difficult to access (such as Iraq or Afghanistan).

Where archaeology will go in the future depends very much on future technological advances and where humans will travel to in the future. With the development of techniques that allow astronomers to detect Earth-size planets it’s even been speculated that archaeologists will increasingly work with astronomers, physicists, biologists and other scientists, to search for the remains of non-human civilizations.