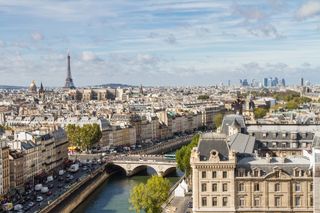 The skyline of Paris viewed from the top of Notre Dame.
(Image: © William Perugini | Shutterstock)

Most people associate French culture with Paris, which is a center of fashion, cuisine, art and architecture, but life outside of the City of Lights is very different and varies by region.

France doesn't just have culture; the word "culture" actually comes from France. "'Culture' derives from the same French term, which in turn derives from the Latin colere, meaning to tend to the earth and grow, cultivation and nurture," Cristina De Rossi, an anthropologist at Barnet and Southgate College in London, told Live Science.

Historically, French culture was influenced by Celtic and Gallo-Roman cultures as well as the Franks, a Germanic tribe. France was initially defined as the western area of Germany known as Rhineland but it later came to refer to a territory that was known as Gaul during the Iron Age and Roman era.

French is the official language and the first language of 88 percent of the population, according to the BBC. It is the dominant language of the country's 70 million residents, but there are a number of variants based on region. French is the second most widely learned foreign language in the world, with almost 120 million students, according to the French Ministry of Foreign Affairs and International Development.

About 3 percent of the population speaks German dialects, and there is a small group of Flemish speakers in the northeast, according to the BBC. Arabic is the third-largest minority language.

Those living near the border of Italy may speak Italian as a second language, and Basque is spoken by people living along the French-Spanish border.

Other dialects and languages include Catalan, Breton (the Celtic language), Occitan dialects, and languages from the former French colonies, including Kabyle and Antillean Creole.

Catholicism is the predominant religion of France. In a survey by the French Institute of Public Opinion (IFOP), 64 percent of the population (about 41.6 million people) identified themselves as Roman Catholic. The other religions in France include Islam, Buddhism and Judaism. From 23 to 28 percent of people in France do not subscribe to a religion, according to the CIA.

The French take immense great pride in their nation and government and are typically offended by any negative comments about their country. Visitors, particularly Americans, often interpret their attitude toward foreigners as rude.

"From around the 16th century, in Europe, culture became a term for the cultivation of the mind, the intellect, knowledge, learning, creative faculties and acceptable ways of behaving," said De Rossi. The French embrace style and sophistication and take pride in the fact that even their public spaces strike a regal tone.

The French believe in égalité, which means equality, and is part of the country's motto: "Liberté, Egalité, Fraternité." Many say they place a higher importance on equality than liberty and fraternity, the other two words in the motto.

The French embody romance and passion, and there is an open attitude toward sex outside of marriage, according to a study by France's National Research Agency on AIDS. Even the country's top politicians have been known to carry out extramarital affairs without making an effort to conceal them. As a reflection of the country's secular nature, it is not uncommon for children are born to unmarried couples.

In addition to traditional marriage, French couples also have the choice of getting a pacte civil de solidarité (PACS). This is a union that has many of the same benefits of marriage, like tax breaks, but can be dissolved with a notice or by marrying someone else or instead of a divorce. Two-thirds as many French couples are in a PACS as are married, according to The Economist.

Food and wine are central to life at all socioeconomic levels, and much socializing is done around lengthy dinners.

While cooking styles have changed to emphasize lighter fare, many still associate French cooking with heavy sauces and complicated preparation. Some classic French dishes include boeuf bourguignon — a stew made of beef braised in red wine, beef broth and seasoned with garlic, onions and mushrooms — and coq au vin, a dish made with chicken, Burgundy wine, lardons (small strips or cubes of pork fat), button mushrooms, onions and optional garlic.

French fries, interestingly enough, may not be French. According to National Geographic, they may actually be from Spain or Belgium. The reason why Americans call fried potatoes French fries is because Thomas Jefferson discovered the treat while in France while serving there as American Minister from 1784 to 1789. He brought the idea back to the States.

Paris is known as the home to many high-end fashion houses, such as Dior, Hermes, Louis Vuitton and Chanel. Many French people dress in a sophisticated, professional and fashionable style, but it is not overly fussy. Typical outfits include nice dresses, suits, long coats, scarves and berets.

The term haute couture is associated with French fashion and loosely means fancier garments that are handmade or made to order. In France, the term is protected by law and is defined by the Paris Chamber of Commerce, according to Eva Domjian, a London-based fashion writer and editor. Domjian writes on her blog:

"To earn the right to call itself a couture house and to use the term haute couture in its advertising and any other way, a fashion house must follow these rules:

Art is everywhere in France — particularly in Paris and other major cities — and Gothic, Romanesque Rococo and Neoclassic influences can be seen in many churches and other public buildings.

Many of history's most renowned artists, including Claude Monet, Edgar Degas, and Camille Pissarro, sought inspiration in Paris, and they gave rise to the Impressionism movement.

The Louvre Museum in Paris is among the world's largest museums and is home to many famous works of art, including the Mona Lisa and Venus de Milo.

The French celebrate the traditional Christian holidays of Christmas and Easter. They mark May Day, also known as Labor Day, on May 1. Victory in Europe Day on May 8 commemorates the end of hostilities in Europe in World War II. Bastille Day is celebrated on July 14. This is the day the Bastille fortress in Paris was stormed by revolutionaries to start the French Revolution.