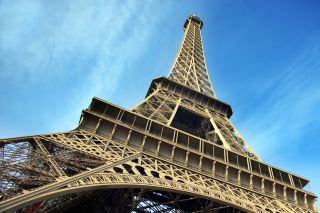 Whether you're lucky enough to have visited Paris or have only ever dreamed of going there, chances are you know of the French capital's most beloved landmark: the Eiffel Tower.

The Eiffel Tower, La Tour Eiffel in French, was the main exhibit of the Paris Exposition — or World's Fair — of 1889. It was constructed to commemorate the centennial of the French Revolution and to demonstrate France's industrial prowess to the world.

"Although at the beginning it was seen as 'the ugliest building in Paris,' soon it became the symbol of the city," said Tea Gudek Snajdar, an Amsterdam-based art historian, museum docent and a blogger at Culture Tourist.

Gustave Eiffel, a French civil engineer, is usually credited with designing the tower that bears his name. However, it was actually two lesser-known men, Maurice Koechlin and Emile Nouguier, who came up with the original drawings for the monument.

Kochlin and Nouguier were the chief engineers for the Compagnie des Etablissements Eiffel — Gustave Eiffel's engineering firm. Together with Eiffel and a French architect, Stephen Sauvestre, the engineers submitted their plans to a contest that would determine the centerpiece for the 1889 World's Fair in Paris.

The Eiffel company's design won, and construction of the wrought-iron tower began in July 1887. But not everyone in Paris was thrilled with the idea of a giant metal monument looming over the city.

Even to contemporary eyes, the Eiffel Tower is unique. But in the late 19th century, nothing had been seen like it. "Modern architecture was emerging slightly in Paris before the Eiffel Tower. But it was doing it in a very shy way," said Gudek Snajdar. Iron, which was newly popular as a building material because of the Industrial Revolution, became a cornerstone of modern architecture. But in 1887, it had only appeared internally, as support structures, or in unimportant buildings like hothouses, factories and bridges.

"The biggest problem was that they still didn't know how to make something aesthetically appealing with the new material. When they were using it, they would try to repeat historic stone structures. It's very visible on — for example, pillars in the Bibliotheque Ste.-Genevieve in Paris," explained Gudek Snajdar. "However, with the Eiffel Tower they changed completely the way they were using the new material. The structure, its appearance is completely new and modern."

When construction of the tower began on the Champs de Mars, a group of 300 artists, sculptors, writers and architects sent a petition to the commissioner of the Paris Exposition, pleading him to halt construction of the "ridiculous tower" that would dominate Paris like a "gigantic black smokestack."

But the protests of Paris' artistic community fell on deaf ears. Construction of the tower was completed in just over two years, on March 31, 1889.

Construction of the Eiffel Tower

Each of the 18,000 pieces used to build the tower was calculated specifically for the project and prepared in Eiffel's factory on the outskirts of Paris. The wrought-iron structure is composed of four immense arched legs, set on masonry piers that curve inward until joining in a single, tapered tower.

Building the tower required 2.5 million thermally assembled rivets and 7,300 tons of iron. To protect the tower from the elements, workers painted every inch of the structure, a feat that required 60 tons of paint. The tower has since been repainted 18 times.

A hallmark of modern architecture

The Eiffel Tower is unquestionably modern in its shape, which is distinct from the Neo-Gothic, Neo-Renaissance and Neo-Baroque styles that were popular in the 18th and 19th centuries, according to Gudek Snajdar. But its material truly made it stand out.

"The Eiffel Tower was one of the first examples of the modern architecture because of the iron," said Gudek Snajdar. "And the fact that the building didn't have any purpose in particular." It existed purely to demonstrate French architectural creativity and skill with materials to the world; it was imbued with meaning but not utility.

The Eiffel Tower is also a more democratic, and therefore modern, structure than other monuments of the time, according to Gudek Snajdar. Gustave Eiffel insisted that elevators be included in the tower, but they had to be imported from an American company because no French company could meet the quality standards, Gudek Snajdar said. "Because of the escalators, the building could be used as a tower from which Parisians and their visitors could enjoy a view on their city. That was something that was before only accessible to a few wealthy people that could afford flying in a hot air balloon. But now, it was rather cheap and anyone could enjoy the view on a city from it," she explained.

"That's why it's a great example of a modern architecture. It's democratic and not only available to a few of a wealthy people. But people of a different social background could use it and enjoy it."

Uses of the tower

The tower was intended as a temporary structure that was to be removed after 20 years. But as time passed, people no longer wanted to see the tower go.

"After seeing the success of the tower during and after the World Exhibition, many of the former enemies of the project publicly apologized. By the time the Exhibition was over, most Parisians were proud of the structure," said Iva Polansky, a Calgary-based novelist and historian at Victorian Paris. "Although there remained a few die-hards like the novelist Guy de Maupassant, who continued to loathe the sight of it."

Gustave Eiffel was also not keen on seeing his favorite project dismantled, and so he set about making the tower an indispensable tool for the scientific community.

Just days after its opening, Eiffel installed a meteorology laboratory on the third floor of the tower. He invited scientists to use the lab for their studies on everything from gravity to electricity. Ultimately, however, it was the tower's looming height, not its laboratory, that saved it from extinction.

In 1910, the city of Paris renewed Eiffel's concession for the tower because of the structure's usefulness as a wireless telegraph transmitter. The French military used the tower to communicate wirelessly with ships in the Atlantic Ocean and intercept enemy messages during World War I.

The tower is still home to more than 120 antennas, broadcasting both radio and television signals throughout the capital city and beyond.

The Eiffel Tower is still the centerpiece of Paris' cityscape. More than 7 million people visit this iconic tower every year, according to the attraction's official website. Since the tower's 1889 opening, 250 million people from around the world have enjoyed all that the Eiffel Tower has to offer.

And it has a lot to offer. The tower's three platforms are home to two restaurants, several buffets, a banquet hall, a champagne bar and many unique gift shops. Educational tours of the tower are available for children and tourist groups.

The tower is open to visitors 365 days a year, with visiting times varying by season. From June to September, the tower remains open until after midnight. Rates vary, but visitors can expect to pay between $13 (10 euros) and $19 (14.5 euros) per person for access to the tower's three public lifts and 704 stairs. Tickets, including group-discounted tickets, can be purchased online or at the ticket office at the foot of the tower.

The Eiffel Tower "provided Paris with the most distinguishable silhouette," said Polansky. Its distinct look has made it an enduring symbol of Paris.

But according to Gudek Snajdar, more than just its striking shape makes it an icon of the city. "Paris was a center of modern art and painting at the time [late 1800s], home to democracy, and hosting the first world exhibition," she said. "It was meant to be a birthplace of modern architecture, too."