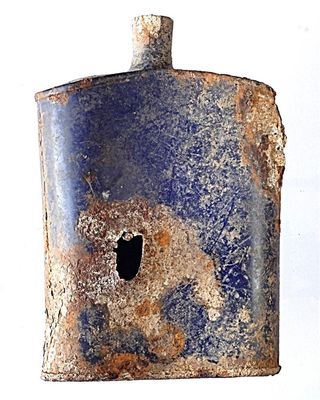 A water bottle with a bullet hole was among the artifacts found during an archeological survey of a First World War site, the Anzac battlefield, on Turkish soil.
(Image: © Department of Veterans' Affairs, Australian Government)

An ongoing archaeological survey of a World War I site in Turkey has so far uncovered a maze of trenches, as well as about 200 artifacts that offer clues to life on a Gallipoli battlefield where troops faced off for eight months.

The survey is one of the most extensive to date of an historic battlefield.

On April 25, 1915, less than a year after World War I broke out, Allied forces — from Australia, New Zealand, Britain and France — landed on the Gallipoli Peninsula, now part of Turkey. Almost a century ago, this land belonged to the Ottoman Empire, an ally of Germany and the Central Powers.

The survey is being conducted on the Anzac battlefield, which measures 2 miles by 1.5 miles (3.2 kilometers by 2.4 kilometers), where the Australia-New Zealand Army Corps (known as the Anzacs) faced off against troops from the Ottoman Empire until Dec. 19 and Dec. 20, 1915, when the Anzac troops evacuated.

As at other WWI battlefields, troops fought from trenches dug into the ground. Some of the networks of trenches found near the frontline of the Anzac battlefield were so dense that they would be difficult to map, even using modern techniques, according to the researchers.

The trenches for both sides were remarkably close to each other, largely because of the rugged terrain, which made their layout much less orderly than trench systems established at WWI battlefields in western Europe, according to Richard Reid, of the Australian Department of Veterans' Affairs, and Ian McGibbon of New Zealand's Ministry for Culture and Heritage, both senior historians working on the project.

The frontline trenches were occupied at all times, since the two sides could be just 10 to 20 yards (9.1 to 18.3 meters) apart. At a spot on the Anzac battlefield called Quinn's Post, both sides constantly lobbed bombs at each other, so troops were regularly rotated in and out, Reid and McGibbon wrote to LiveScience in an email.

The survey, done as part of the second season of field work at the site, also uncovered the top of a tier of terraces constructed to house reserve troops at Quinn's Post on the Allied side. This discovery was a pleasant surprise because erosion was feared to have obliterated these terraces, they wrote.

"In terms of archaeology, the most significant finds are perhaps related to living conditions on both sides of the lines — the eating and drinking habits of the troops. A Turkish oven was located, and 200 relics of the fighting, ranging from bullets to bullet-holed water cans," they wrote.

These include pieces of medical bottles; tin containers that once held food, such asbully beef, sardines and jam; expended ammunition; shrapnel and barbed wire fragments. It appears the Turkish troops had more access to fresh-cooked meals, than troops on the Allied side, where food tins were more abundant.

"Despite the historical importance of the Gallipoli battlefield, our knowledge of this area to date has been based on maps and written accounts. This area has never been studied in detail through modern archaeological survey methods," said Warren Snowdon, Australia's Minister for Veterans' Affairs in a statement. [History's Most Overlooked Mysteries]

The survey, part of the five-year-long Turkey, Australia and New Zealand Historical and Archaeological Survey of the Anzac Battlefield is one of the largest investigations in battlefield archaeology ever attempted, according to the Australian government.

This year and last year, excavators have found almost 18,763 feet (5,719 meters) of trenches, 16 cemeteries, about 200 artifacts and numerous collapsed tunnels, dugouts and other features. The next session of field work is planned for September 2012.

From a military perspective, the Turks won the campaign but lost more than 80,000 dead. The Ottoman Army never really recovered from this effort, and ultimately had to accept defeat in 1918, wrote McGibbon and Reid.

Ultimately, this campaign was important to the development of modern Turkey, New Zealand and Australia, they wrote.

This article was updated at 6:55 pm ET on Nov. 2 to include Ian McGibbon's correct title.