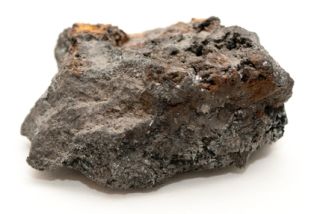 Pyrolusite (manganese dioxide) is one of the most common manganese minerals.
(Image: © farbled | Shutterstock)

Manganese is a very hard, brittle, gray-white transition metal that is naturally found in a variety of minerals, but never on its own. Manganese is one of the most common elements in Earth's crust and is widely distributed across the planet's surface.

Manganese is vital to human and animal life in metabolic functions. Many alloys containing manganese are used in steel production, glass making, and even to make the aluminum in soda cans thinner and stronger.

Manganese has been used since ancient times, science writer John Emsley wrote in an article in Nature Chemistry. Cave artists in France used the black ore (manganese dioxide or pyrolusite) at least 30,000 years ago. Pliny the Elder, a Roman philosopher, wrote in the first century A.D. that it was also used in glass making to make the glass clear and as a black pigment in pottery.

In 1740, Johann Heinrich Pott, a German chemist, observed that pyrolusite contained a new earth metal, rather than iron as was commonly believed, according to Chemicool, and Ignatius Gottfried Kaim, an Austrian chemist, first isolated manganese in 1770. The isolated metal was impure, and several attempts to purify manganese failed. Johan Gottlieb Gahn, a Swedish chemist, came close in 1774 when he produced a white, hard, brittle metal.

One major research area involving manganese is in health. It is known that manganese is essential for human systems to function properly and too much is bad for you. Much research is being done investigating exposure to an excess of manganese.

One set of studies focuses on researching a potential link between manganese exposure in children and their intellectual function. A study by a group of researchers in the United States and Bangladesh published in 2011 in NeuroToxicology by Wasserman, et al. expanded upon a previous study that only studied the effects of arsenic on children. The researchers tested levels of manganese in 299 children between the ages of 8 and 11. The study found that there is a significant link between a variety of manganese markers and perceptual reasoning and memory skills.

Several additional studies following up on the previous one were published in subsequent years, including one published in Environmental Health Perspectives in 2015 by Wasserman, et al. with about 300 10-year-old children. Another one, published in Environmental Health in 2016 by Rodrigues, et al., studied over 500 children that were 2 to 3 years old. Both studies involved teams of scientists from the United States and Bangladesh working with Bangladeshi children. Blood samples were taken in both studies and levels of manganese and arsenic were measured (as well as lead in the second study). As with the 2011 study, researchers found that that reduced levels of manganese (as well as arsenic and lead) in the drinking water showed increased working memory and other cognitive functions. Continued research will be conducted to determine longer-term effects of high levels of manganese exposure in the intelligence of children.

Another study published in Environmental Health Perspectives by Rohman, et al., a group of scientists from Sweden and Bangladesh, performed a similar study focusing on behavior as well as cognitive abilities in 10-year-old Bangladeshi children. The study tested a group of children from the time the mothers were pregnant until they were 10, and increased exposure to manganese early in life appeared to lead to increased risk of behavior problems when the children were 10.