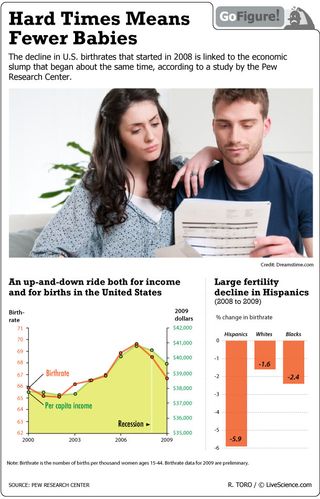 A lighter wallet seems to mean more than cutting back on shopping splurges, as Americans also responded to the 2008 recession by having fewer kids, according to the Pew Research Center.

The survey analyzed multiple sources of data and found that birthrates began to decline in 2008 after a high point of 4,326,233 new babies in the U.S. in 2007. By 2009, the number of births fell to 4,131,018, and early numbers suggest that barely more than 4 million babies were born in 2010. Interestingly, the declines in births occurred within a year or two of the start of the economic slide, the Pew survey showed.

"This does not conclusively prove that the economic changes led to fertility changes," Pew researchers wrote in the report released Oct. 12, 2011. "However, the timing is consistent with the time it might take people to act upon fertility decisions."

As for why, the Pew researchers suggest falling birthrates during a bad economy reflect people's decisions to put off having children, rather than their intention to have fewer children overall. In other words, these families will likely catch up on baby-making once economic conditions improve.