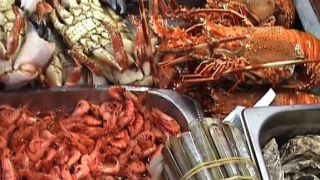 Crab, lobster, shrimp and oysters are low in mercury content and safer to eat than other fish, including shark, bluefish, grouper and Chilean sea bass.
(Image: © NOAA)

Mercury is a naturally occurring chemical, but it can become harmful when it contaminates fresh and seawater areas. Fish and other aquatic animals ingest the mercury, and it is then passed along the food chain until it reaches humans. Mercury in humans may cause a wide range of conditions including neurological and chromosomal problems and birth defects.

Mercury is naturally occurring element in the Earth's crust that is released into the environment with natural events such as volcanic activity. Mercury commonly occurs in three forms: elemental, inorganic and organic.

"Human activities like coal burning, gold mining and chloralkali manufacturing plants currently contribute the vast majority of the mercury released into our environment," said Dr. Anne M. Davis, an assistant professor of nutrition and dietetics director at the Didactic Program in Dietetics of the University of New Haven.

When mercury is released into the atmosphere, it is dissolves in fresh water and seawater. A type of mercury called methylmercury is most easily accumulated in the body is and is particularly dangerous. About 80 to 90 percent of organic mercury in a human body comes from eating fish and shellfish, and 75 to 90 percent of organic mercury existing in fish and shellfish is methylmercury, according to a paper published by the Journal of Preventative Medicine and Public Health.

Once in the water, mercury makes its way into the food chain. Inorganic mercury and methylmercury are first consumed by phytoplankton, single-celled algae at the base of most aquatic food chains. Next, the phytoplankton are consumed by small animals such as zooplankton. The methylmercury is assimilated and retained by the animals, while the inorganic mercury is shed from the animals as waste products, explained Davis. Small fish that eat the zooplankton are exposed to food-borne mercury that is predominantly in the methylated form. These fish are consumed by larger fish, and so on until it gets to humans.

"Because the methylmercury is highly assimilated and lost extremely slowly from fish, there is a steady build-up of this form of mercury in aquatic food chains, such that long-lived fish at the top of the food chain are highly enriched in methylmercury," said Davis. "Methylmercury therefore displays clear evidence of biomagnification, where its concentrations are higher in predator tissue than in prey tissue."

Mercury poisoning is a slow process that can take months or years, according to the National Institutes of Health (NIH). Since the process is so slow, most people don't realize they are being poisoned right away. Mercury from food sources is absorbed into the bloodstream through the intestinal wall, and then carried throughout the body. The kidneys, which filter the blood, can accumulate mercury over time. Other organs can also be affected.

Negative health effects from methylmercury may include neurological and chromosomal problems. According to the NIH, long-term exposure to organic mercury can cause:

"Most notable are the effects of mercury on the brain," said Aimee Phillippi, a professor of biology at Unity College in Unity, Maine. "Mercury poisoning can result in hearing and vision changes, personality changes, memory problems, seizures or paralysis. When children are exposed to mercury, they may have developmental or muscle coordination problems. Mercury interferes with the calcium channels that cells, especially nerve and muscle cells, use to carry out their functions."

The toxicity of methylmercury may also have reproductive consequences. Pregnant woman who eat fish and seafood contaminated with methylmercury may have the increased risk of having a miscarriage, or having a baby with deformities or severe nervous system diseases. These birth defects can happen even if the mother doesn't seem to be poisoned.

A study by the Universidad de los Andes, Bogota, Colombia, found that eating food contaminated with methylmercury can even alter the chromosomes in humans.

What to look for

While the answer to mercury contamination could be to avoid all fish and seafood, that wouldn't be a healthy choice. "The problem lies in that fish high in methylmercury are also high in omega-3 DHA (docosahexaenoic) fatty acids, which are important for pregnant and lactating women and infants and children. DHA is needed for vision (retina development), immune status, fetal and infant brain development and cognition and heart health," said Davis.

The FDA recommends eating two to three servings (8 to 12 ounces or 227 to 340 grams) of fish each week. The key to getting the health benefits with the least amount of mercury is eating fish that are low in mercury content or by obtaining DHA through dietary supplements such as fish oil and algal oil.

Some fish and seafood that are low in mercury, according to the National Resource Defense Council include:

Be sure to avoid fish that are commonly high in mercury, which include tilefish from the Gulf of Mexico, shark, swordfish and king mackerel, according to the FDA. Also avoid marlin, bluefish, grouper, Spanish and Gulf mackerel and Chilean sea bass.

There is a disagreement about how much fish pregnant women should consume. The Mayo Clinic recommends that women who are pregnant avoid eating any fish, while the FDA and the Environmental Protection Agency (EPA) recommend 12 ounces (340 g) per week. The 2010 Dietary Guidelines for Americans recommend 8 to 12 ounces (227 to 340 g) per week.

"Unless you get all your seafood tested, you cannot avoid mercury 100 percent," said Phillippi. "However, you can significantly reduce your exposure by choosing species that are lower on the food chain. Fish like haddock, flounder, pollock, herring, as well as most shellfish, eat lower on the food chain and are therefore less likely to have much mercury in them."

Phillippi went on to explain that the FDA does test for mercury in seafood and helps to keep fish with unacceptable levels out of the consumer market. This means an individual piece of fish that is bought commercially should not be cause for concern. When eating large quantities of fish, though, make eating choices based on the species for the lowest amount of mercury.